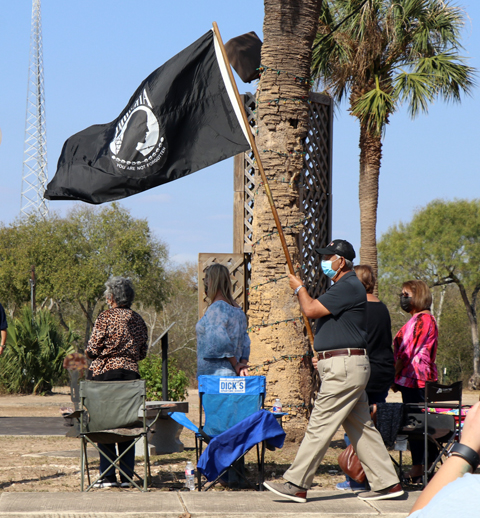 Natalia hosted their 22nd Annual Ceremony on Veteran’s Day November 11, 2020 in downtown Natalia at the Veteran’s monument in a beautiful outdoor event while observing social distancing and use of masks with a smaller crowd than normal since the schools were not invited due to safety concerns in these times of COVID-19. Ruby Vera put on another amazing event to honor our veteran’s and vowed to continue to do so as long as she is capable of doing so.

“Good morning and welcome – honored service members, veterans, ladies and gentlemen. On behalf of the Natalia Municipal District and City of Natalia thank you for joining us today to pay tribute to all active duty members and veterans of the armed forces. As we all know 2020 has been an unusual year to say the least – and I do apologize for this year’s modified ceremony. But better a modified ceremony than no ceremony at all,” said Ruby Vera.
“2020 marks our 22nd Annual Ceremony where we are honoring and paying tribute to those of you who made the choice to protect and defend the Constitution of our United States from all enemies foreign and domestic. What you are doing and have done protects our freedom, a freedom we so often take for granted. Our democracy has endured internal and external threats – and yet here we are “one nation under God with liberty and justice for all.” Nowhere else in the world can this statement be made.
“The United States endured civil war; four (4) years of World War I; four (4) years of World War II; three (3) years of Korea; twenty years (20) years of Vietnam; eight years of the Iraq war; and a never ending war in the middle east.
“Each year as we gather at this ceremony we see less veterans from WWII and Korea, the war in Vietnam is taking and has taken a significant toll on our Vietnam veterans, who would have thought that we would still be in the middle east with no end in sight. North Korea continues to pose a significant nuclear threat yet, through all of this we know that no matter what, our military forces will do everything they can to protect our nation and help keep peace worldwide. So I will pose a question to you today, “Why do the sons and daughters of small towns choose the military way of life? Is there a common thread of the sacrifice and dedication that flows from these volunteers?”
“President John F. Kennedy said ‘since this country was founded, each generation of Americans has been summoned to give testimony to its national loyalty “I repeat, since this country was founded, each generation of Americans has been summoned to give testimony to is national loyalty“. I propose to you that small towns in Texas and in the U.S. offer a distinct way of life that uniquely shapes the character of our nation’s sons and daughters. Small towns have a long history of providing volunteers who are willing to serve in our armed forces. The sense of community, patriotic duty, accountability for actions, respect for authority, and strong traditions are common to military life as well as small-town life. These individuals are well equipped for the demand of military life, and they excel in an atmosphere of close-knit relationships. The most important factor sustaining these men and women through combat has been a strong unbreakable sense of community. This same quality is alive and well in small towns like Natalia and across America. This is the key to greatness for our armed forces and this is what has made America great.
“Remember as you pray morning and night to pray for these brave men and women who have chosen to protect and defend our country. Additionally, I ask you to remember those who gave the ultimate sacrifice in defense of our great nation.
“Veterans Day originated as “Armistice Day” on November 11, 1919, the first anniversary of the end of World War I. Congress passed a Resolution in 1926 for this annual observance and November 11th became a national holiday to pay tribute to all American veterans – living and deceased, but especially to the living veterans who served our country honorably during war or peacetime. Veterans it is with honor and pride that I say “thank you” on behalf of all of us here today for having proudly served our country and to let you know we will not forget the sacrifices you made and continue to make for us. Additionally, we want to say thank you to all families of these brave men and women who have supported their decision to serve our country, ” said Vera.
Pastor Lenard Dossey of the First Baptist Church gave the invocation.
All Ladies and gentlemen were asked to please rise for the presentation of the colors and remain standing for the raising of the flag of the United States of America; the playing of our national anthem and then joined in as all recited the Pledge of Allegiance to our flag together.

Presenting the colors of our nation was the color guard of VFW Post 3966.members Tom McLaughlin, Alejandro Samaripa, Quartermaster Rick Ch pa and Commander Jesse Rodriguez.
The service flags are presented by veterans and community members. Veterans and active duty members were invited to stand as the flag of the branch of service they served in was presented and that service song played. The flag of the United States Army was presented by: Victor Bermea, Jr.
The flag of the United States Navy was presented by: Albert A. Smith.
The flag of the United States Coast Guard was presented by: Darin Frazier.
The flag of the United States Marine Corp was presented by: Jamie Gomez.
The flag of the United States Air Force was presented by:Daniel Sanchez, Jr.
All were asked to rise as the POW-MIA flag of the prisoners of war and missing in action was presented by Natalia Mayor Tommy Ortiz..
VFW Post 3966 Color Guard: Lead Rifleman – Vice Commander Tom McLaughlin
US Fag Bearer – Commander Jesse Rodriguez
Rifleman – Alejandro Samarripa
20 Names added this year
This year we added twenty (20) new names to our monument. County Commissioner Pct 4, Jerry Beck did the honors of reading out the names. When the name is read out, if you are in attendance or if family members are in attendance, please stand and be recognized.
2020 Names for Veterans Monument:
Air Force
Barnett, Chase T.
Emery, George E.
Juarez, Rudy III
Martin, Audie G. (Russ)
McQuoid, James A.
Army
Campos, Angel V.
Campos, Domingo M. Jr
Davison, Danny J.
Haro, Susano
Long, Gavin J.T.
Soto, Matias G.
Navy
Alaniz, Tony Ray
Campos, Domingo III
Campos, George
Campos, Josefa G.
Gonzales, Celso Jr.
McDavid, Alyssa J.
Marines
Barnett, Robert R.
Campos, Angel T.
Juarez, Ryan N.
Because of this year’s modified ceremony, we will announce these names again next year at our ceremony to give them the proper tribute they deserve.
” I would like to take this opportunity to thank and acknowledge everyone who helped make this year’s ceremony a success. The Natalia Police Department; Medina County Sheriff’s Department, Mr. Keith Lutz, Medina Country Emergency Coordinator and the local office of the Texas Department of Transportation for their continued support of this event. I would also like to thank Mr. Rick Sepulveda for the landscape work he has done at our monument area,” said Vera.
The final portion of the ceremony was the laying of the wreath to honor all veterans by key note speaker and members of the St John Bosco Guadalupanos, Ms. Dora Peralta and Ms. Maria Sanchez. The wreath is a remembrance to the veteran’s ceremony from the SJB Guadalupano Society.
Mr. Keith Lutz – Medina County Emergency Management Coordinator concluded theceremony with a song.
“Thank you very much for coming and thank you once again service members and veterans for all you have done for our country, ” said Vera.