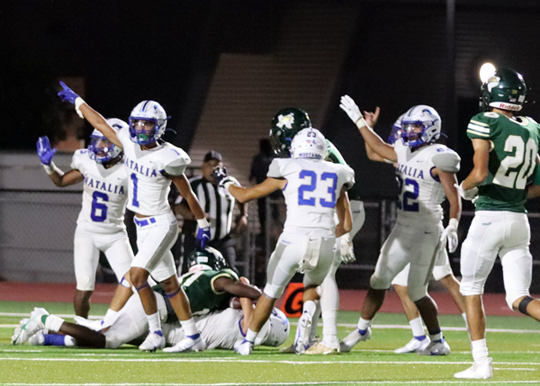 The Randolph Ro-Hawks will soar into Natalia on Friday coming off a tough 12-0 shut-out road loss at Schulenburg. This will be the first meeting between Natalia and Randolph since 2019-2020 (Natalia won 27-21) as last year’s contest was canceled due to Covid protocols by Bexar County.
Natalia will look to rebound from a tough road loss at Ft. Sam Houston as it should be a good one at Mustang Stadium between two talented teams.
Randolph Outlook
The Randolph Ro-Hawks return five offensive and six defensive starters from their 6-5 squad a season ago that fell in the Bi-District round of the playoffs. Randolph opened this season with a big win vs. struggling YMLA 42-7 before their shut-out loss vs. always tough Schulenburg on the road.
“Randolph is a big physical football team and they are well coached,” Natalia Head Coach Ilyan Martinez said. “We are going to have to match their physicality and make the most of our opportunities.”
Offensively, Randolph has traditionally been a Wing-T football team, but has moved into a shot-gun look.

“They still run a lot of the same concepts,” Martinez said. “Their entire offensive line is big and physical. They are athletic enough to get out and get on you in a hurry.”
Randolph is led by #2 RB Colton Howard who rushed for over 1,000 yards a season ago. “He is their work-horse and they have several players at the skilled position that can make plays. Their QB Aaron Davis is only a sophomore, but does a good job of running the offense.”
Defensively Randolph is always physical and quick to the ball.
“Their front seven are big and physical and they don’t do much, but they are going to be tough to move off the ball,” Martinez said. “Their secondary is athletic and run to the ball and we will have our hands full attacking and taking what they give us.”
Natalia Outlook
Natalia will return to action with a chip on their shoulder after a disappointing road loss last week.
“We have plenty to work on across the board and we want to be better than we were a week ago,” Martinez said.
Like Cole, Natalia will need to assure that big plays don’t happen as Randolph will have some speed that can hurt as well. Offensively, Natalia will need to find success on the ground early and the battle up front must be won in order for Natalia to have that needed success offensively.
“We have a long season ahead of us and the lessons we learn each week will only help prepare us for a tough district,” Martinez said.
Kick-off is set
The kick-off is set for 7:30 p.m. at Mustang Stadium. Come out, pack the stands with blue and white and cheer on the Stangs as they battle the Ro-Hawks of Universal City Randolph Field!
By Eric Smith
Staff Writer