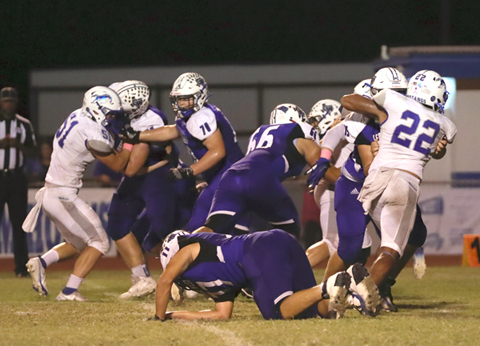 The 2021 Battle of the Mustangs will take place this coming Friday at Mustang Stadium as Natalia (6-1, 3-0) will host the Nixon-Smiley Mustangs (2-4, 0-2) for Homecoming 2021. Natalia enters the game on a five-game win streak as Nixon is coming off a two-game district losing streak.
Nixon-Smiley Outlook
Nixon-Smiley is under the new coaching direction of Troy Moses who took over a Nixon-Smiley program that finished 3-6 overall and 1-5 in district play. This season, the Mustangs enter 2-4 overall and 0-2 in district play as mentioned. The Mustangs have the following results thus far: 14-6 win vs. Bloomington, a 25-12 loss to Three Rivers, a 42-13 loss to Hallettsville Sacred Heart, a 34-14 win vs. Charlotte, a 31-12 district opening loss to Stockdale and a 36-0 loss two weeks ago to George West.
“Coach Moses is entering his first year as the head coach and is installing an offense that takes time,” Natalia Head Coach Ilyan Martinez said. “Watching them over the course of the season, they continue to get better and more confident.”
According to Martinez, Nixon-Smiley has switched over to the Slot-T offense which is different than their triple option they ran the last few seasons.
“We will have to be sound defensively and slow down their backfield if we are going to be successful,” Martinez said. “Defensively, they run a 4-3 Cover-3 with a lot of man concepts and bring pressure at different times.”
According to Martinez, #14 Bradyn Martinez is their best player on both sides of the football.

“He has great speed and if we don’t tackle him, I am not sure we have anyone that can catch him in open space,” Martinez said. “Defensively, he is their guy as well and plays safety like a linebacker and is always downhill and around the football.”
Nixon welcomed back just three overall starters from a season ago offensively and just six defensive players.
Natalia Outlook
The Natalia Mustangs are coming off their fifth straight win where defense and forced turnovers have been the keys to the majority of their victories this season. Friday night will be no different. Traditionally, Natalia has struggled at times vs. the Wing-T offense which is something Skidmore-Tynan use to run along with a few other schools throughout the years.
One of the keys to slowing down this offense will be to win the battle up front with the line and play disciplined football when it comes to assignments.
“We will have to come out and establish the run early and dominate the game up front,” Martinez said. “Defensively, we will have to be disciplined in our play and do a great job of tackling.”
Natalia has continued to use a number of various weapons on offense which should provide a number of challenges for the Nixon-Smiley defense.
Homecoming is set
Pre-game Homecoming Festivities will include Clubs as the Homecoming Court will be recognized during the half-time ceremonies. Following the game, the Natalia Mustang Band will have a final performance before their Regional Competition on Saturday in Hondo.
Be sure to come out, Pack the Stands with plenty of blue and white, visit with old friends and cheer on the Mustangs as they battle Nixon-Smiley at 7:30 p.m. as they look to improve to 4-0 in district play and 7-1 overall.
By Eric Smith
Staff Writer