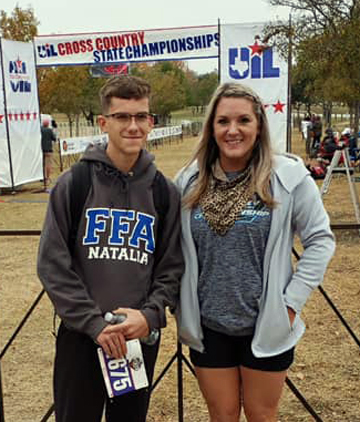 After not even knowing if he was going to be cleared medically to compete at State on Monday, November 23rd, Natalia Mustang Noah Gilkey placed 61st of 124 runners with a time of 17:15.81.
“What a day!” Head Coach Kim Lane stated. “Noah is AWESOME! He ran his PR to end the season. As a coach, one of the ultimate goals is to have your athletes compete at the highest level. This year, I was fortunate to have an athlete that wanted it, believed he was worthy, and prepared to make it to this platform. I am beyond proud!”
At Regional, Noah fell about 50 meters from the finish line and struggled more than once to get to his feet to even finish the race. He was in third when he collapsed, but finished in the 15th and final qualifying spot to make it to Round Rock.
“Thank you for setting the bar, Noah!” Lane continued. “Until next season…”
By Jerel Beaty
Staff Writer