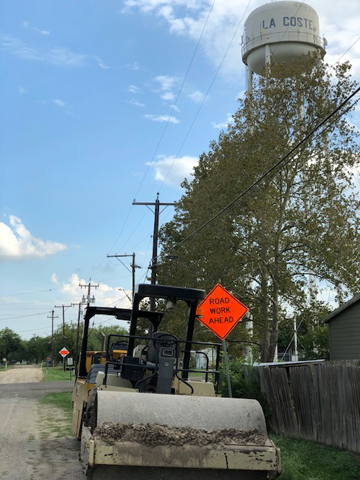 La Coste is repaving roughly half of its city streets, thanks to an agreement with Medina County.
Without much cash and few workers, La Coste has gotten helping hands from county road crews and equipment to repair and repave more than a dozen badly potholed, worn-out streets.
City Administrator George Salzman said the inter-local agreement with Precinct 2 Commissioner Larry Sittre enables La Coste to stretch its modest road budget.
With the county supplying manpower and equipment, La Coste only has to buy the materials. The city has expended about $90,000 on work that began in July and is expected to run to the end of the year.
“We’re basically getting free labor,” said Mayor Andy Keller. “We’re going to keep moving while we have it.”
Sittre says it’s a good deal for the county, too.
Noting that La Coste crews regularly clear brush and dead animals from adjacent county roads, Sittre said the city “gives as well as they get.”
“We’ll break a water line and they’ll fix it. We’re not going to sit here and fight about it.”
Both Keller and Sittre call the joint venture “a blessing” for the community at large.

While Medina County doesn’t contribute any cash to La Coste’s street project, Sittre said Precinct 2 receives about $550,000 annually in added road funding through a special $0.05 cent tax voters approved five years ago.
Sittre said the precinct-wide tax – the only one of its kind in the county — pays for about 75 miles of additional paved roads each year. “These are roads we wouldn’t have otherwise,” he told the News. “It costs the owner of a $200,000 house $100 a year.”
In La Coste’s city limits, where some streets have deteriorated to the point where barely any asphalt remains, Salzman said work is progressing. Initial repairs are being made, after which seal-coating will be applied by a private contractor.
City officials are optimistic that the sealcoat will be available at modest cost, as petroleum prices are depressed.
Streets scheduled for repair, or completed, include D’Hanis Avenue, Uvalde Street, Casiano Avenue, Raymond Avenue, Medina Street, Carle Avenue, Keller Street, Pecos Street, Flores Avenue, Val Verde Street, Brewster Street, Buchel Street and Eidelweiss Drive.
Keller said he hears from residents asking, “When are you going to do my street?”
Not everyone will see their roads fixed as soon as they might like. But with the inter-local agreement, La Coste is miles ahead of where it would be otherwise.
The project covers roughly five miles (about half the city’s total street distance). However, the cost of the seal coat finish has not yet been calculated, so the final expenditure will be something north of $90K.
By Kenric Ward
Reporter