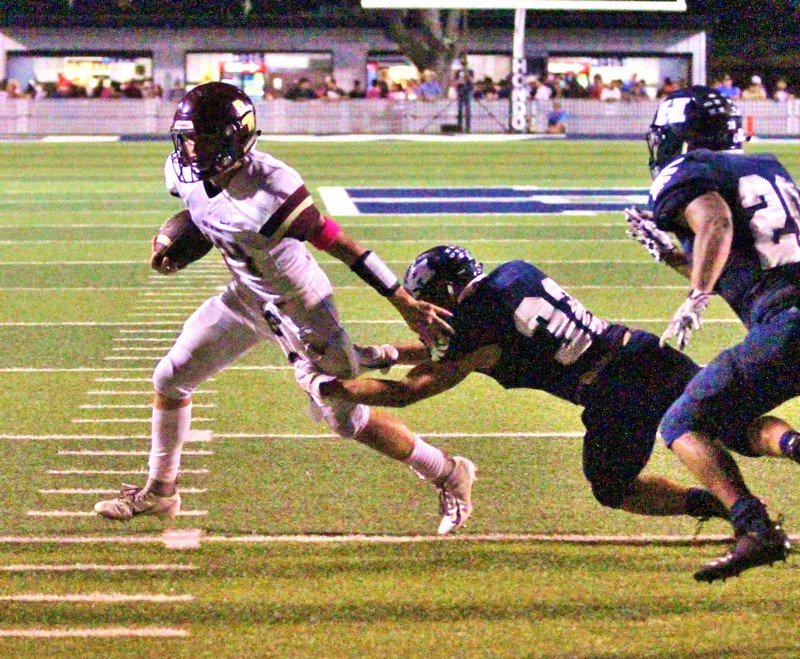 Devine quarterback Chad Lawson and wide receiver Quentin “Guido” Zapata were recognized in the area statistical leaders in Tuesday’s San Antonio Express News edition.
Lawson is 17th in total yards with 1,209. He has completed 43 of 76 passes for 950 yards and has rushed for 259. He also has thrown for eleven touchdowns. On top of the passing numbers, Cheese has rushed 68 times for 259 yards and two scores. Defensively, Lawson is tied for 5th in interceptions with three.
Highlights for Lawson this season include completing 10 of 14 attempts for 202 yards and three touchdowns against San Antonio Legacy. He rushed 10 times for 102 yards in that game as well. Against Central Catholic, he connected on 75% of his attempts, hitting 9 of 12 targets for 219 yards and two touchdowns.
This past Friday versus Hondo, Lawson was 7 of 15 for 206 yards and two scores in the Warhorses district-opening 32-29 victory over the Owls.
Zapata is 7th in receiving yards with 580 on 27 catches. Guido is averaging 21.48 yards per catch and has seven touchdown receptions. He also has one interception on defense.

Guido’s top games include a 4 reception, 112 yard, two-touchdown performance against San Antonio Legacy. Central Catholic Buttons provided his best statistical night as he netted 203 yards on 8 catches for 25.4 yards per catch. He also had two touchdowns in that game.
In the Hondo game, Zapata grabbed five passes for 107 yards and one touchdown. His 77-yard TD score in the second quarter boosted his 21.4 yards per catch.
By Jerel Beaty
Staff Writer