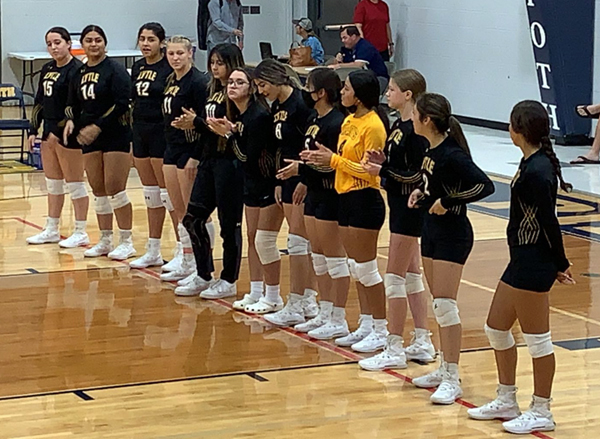 The Lady Pirates added a win and a loss to their record last week. Now 5-6 in district and 7-13 overall, they look to finish the season strong. Friday they will host Dilley and then be on the road Tuesday in Natalia and October 22nd at West Campos. Their last game will be at home against Cotulla.
At Parents Night, October 5th, the Lady Pirates faced Karnes City and ended the night with a 3-0 win. “The Pirates won the coin toss and secured the first serve of set 1. Amelia Martinez started her debut as the defensive specialist and Alyssa Sprenger as offensive hitter. We hit a couple of snags in the first set with receiving the serve but we managed to bounce back and win set one, 26-24. In the second set we played with more energy and communicated well, winning the second set 25-21. Entering the third set, the Pirates managed to take over with great serving and a couple of return kills from Chelsea Gonzalez, Skye Granato, and Rose Scotello. Pirates won the third set, 25-20, great teamwork and court coverage. To the volleyball parents at Lytle: Thank you for all that you do to help support your daughters as well as the Lytle Volleyball program, you are greatly appreciated,” added Coach Denise Cordero.
Pirate of the Game: Scotello #11: 2 aces, 12 kills, 1 block, 6 assists, 5 digs. Player stats: Granato 4 kills. Alyssa Montalvo 6 digs. Kaylee Diaz 1 ace, 1 dig. Martinez 2 assists, 15 digs. Sprenger 2 aces, 2 kills, 13 digs. Marissa Lopez 1 ace, 5 kills, 12 assists, 4 digs. Gonzalez 2 aces, 6 kills, 1 assist, 8 digs.
Friday night in Poth it was the second district battle of the Pirates. Poth won this battle in three at 25-6, 25-10, and 25-17. “Poth started the set with some strategical serving and Lytle just couldn’t find the rhythm to stop Poth in the first set. In the second set our Pirates we were able to put up points but not enough to win the set. We struggled defensively, we had some great serves and a couple of kills but we just could not stop the Poth Pirates,” said Coach Cordero.
Pirate of the Game: Scotello 2 aces, 6 kills, 2 assists, 6 digs. Player stats: Lopez 1 ace, 5 assists, 4 digs. Sprenger 1 assist, 3 digs. Patino 6 digs. Montalvo 1 dig. Diaz 2 digs. Garcia 1 block. Gonzalez 1 dig. Granato 3 kills, 1 dig.
By Dicy Chambers
Sports Writer