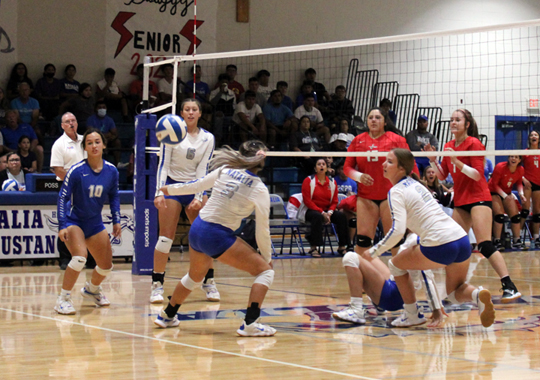 The Lady Mustangs played two more district games last week and added a win and a loss to their record. Now 7-3 in district and 19-6 overall they are hanging on to their playoff chances. Coach Tara Cortines knows her team has it in them to push far into playoffs.
Tuesday, September 28th, Natalia hosted Jourdanton and the first set was intense which ended in favor of Jourdanton 25-22. The Lady Mustangs lost a little momentum and lost the last two sets 15-25 and 16-25.
Jelli Padilla 8 kills, 2 aces. Kylee Spangler 5 kills, 1 block. Katie Curiel 2 kills. Tommie Gunn 6 assists. Isabella Martinez3 assists. Tina Fulton 9 digs. McAilya Ruiz 4 digs. Abigayle Woodson 2 aces.
Friday night at home, the Lady Mustangs hosted West Campus and won in three sets. There was not much competition on the West’s side of the court as Natalia easily won 25-8, 25-15, and 25-21. It was only in the last set that Natalia had to step up to keep ahead of West Campus. This was their second win over West Campus in district.
Spangler 7 kills. Padilla 6 kills, 5 digs, 5 aces. Allison Crowther 2 kills. Martinez 10 assists. Gunn 4 assists, 5 aces. Anaya Jones 6 digs. Fulton 3 digs, 5 aces.
By Dicy Chambers
Sports Writer