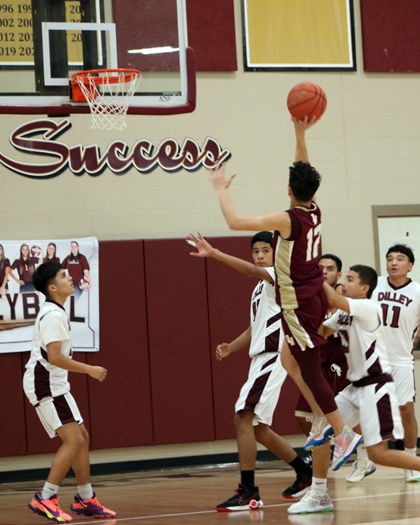 Within a week the JV Warhorses went from their first win to a 5-1 record. Coached by Gary Schmidt, the team of 13 faced Dilley in their first game, competed in their home tournament, and then took on Ingram on Monday.
Opening their season against Dilley on November 16th, the JV Warhorses were “slow in the 1st half and very strong defense and offense in 2nd half,” said Coach Schmidt. Tied 16-16 at the end of the first quarter, the Warhorses gained the lead by the half at 25-21. They really took control in the third and limited the Wolves to just 4 points. Devine would continue at that pace to win the game 55-37.
Elijah Contreras 4, Jordon Roberts 10, Juan Billalobos 5, Rylan Mata 10, Jonathan Esquibel 8. Jacob Adams 10, Jose Morales 3, Ruger Cote 1, Antonio Gamboa 4. Kris Aguirre, Wero Torres, Carson Suhr, and Trinidad Hernandez contributed defensive.
The Warhorses first tournament of the season was also their home tournament. They opened against Marion on Thursday and both teams got off to a very sluggish start with the first quarter ending 7-5. Marion would take the lead by the half at 23-16. The rest of the game went to the Warhorses as they took the lead in the third and held on for the 51-42 victory.
Aguirre 2, Contreras 7, Roberts 15, Billalobos 3, Mata 10, Hernandez 5, Antu 4, Suhr 5.
When the Warhorses faced Comfort, it was a much tighter game. Comfort was within one point at the end of the first two quarters and lead 39-35 at the end of the third. The Warhorse pressure wore them out and Devine took the lead and win at the last buzzer 48-45.
Aguirre 6, Contreras 3, Roberts 11, Billalobos 4, Mata 12, Suhr 4, Esquibel 4, Antu 4.
The JV’s only loss came when they faced Pleasanton. The Eagles were able to stop Devine’s plays and steal the ball. Devine lost 28-65.
Roberts 8, Billalobos 3, Mata 6, Esquibel 3, Hernandez 4, Antu 6, Cote 8.
In their final match up against Dilley, the Wolves were still hurting from Monday’s loss and played a much more aggressive game. The game was tight the whole time and it came down to the last few moments when Devine squeaked out the 44-43 win.
Torres 2, Contreras 3, Roberts 6, Billalobos 5, Mata 9, Esquibel 9, Adams 4, Cote 6.
Through the whole tournament, Coach Schmidt was proud of how his team played and for taking 2nd in their tournament. Pleasanton won 1st undefeated.
Their 5th win of the week came over Ingram on Monday. Winning 52-11 it was the blowout the boys needed before the fall break. They held Ingram to just one point in the second half while they doubled their score.
Torres 3, Roberts 9, Billalobos 2, Mata 6, Suhr 7, Esquibel 4, Hernandez 5, Antu 5, Morales 11.
The JV will compete in the Dilley Tournament December 3-4th and then be at home to play Bandera on December 14th.
By Dicy Chambers
Sports Writer