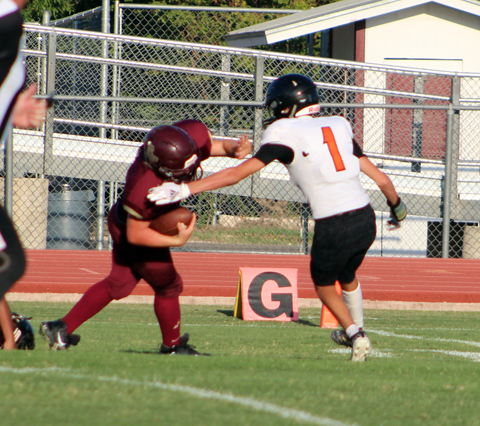 So close, but yet so far. The Devine Warhorse JV team went down 20-16 to the visiting Refugio Bobcats last Thursday. Devine trailed by as many as 14 points in the first half before storming back to take a 16-14 lead late in the third quarter.
After Devine’s Luke Friesenhahn scored from 27 yards out to put the Horses up by two with :27 seconds left in the third. The Bobcats quickly answered on a 45-yard touchdown pass completion on their first play after receiving the kick.
There is always a little bit of rust to shake off duringa team’s first game of the season. As the Warhorse season moves along, look for less frequent turnovers and to commit fewer penalties. Putting a quick fix on those two parts of the game automatically gives the Horses a better chance of coming out victorious.
“The three turnovers killed what would have been really good drives for us offensively,” Coach Heath Poppe said. “Not capitalizing on those drives was the difference in the game. When teams lose the turnover battle, they usually do not come out on top. We are not firing yet on all cylinders and I will take that blame as the coach. We will get there next week. Offensively we shot ourselves in the foot a lot. Miscues on blocking assignments, running backs not staying on path, not running the correct routes on pass plays all contributed to us not being successful on many of our plays. We looked great on the drives we scored on but fumbles and not knowing our assignments killed drives. We have to get that corrected.”
The first game also provides critical feedback coaches need to improve. The feedback the coaches received off a narrow season-opening loss should have the JV team looking much better the next time they take the field.
JV Squad
This year’s team includes Luke Friesenhahn, Ryan McClain, Ignacio Cisneros, Isaiah Morin, Johnathan Weinkam, Aaron Saenz, Gus Puente, Camden White, Josiah Martinez, Kristofer Aguirre, Stephan Culver, Diego Gerlach, Nick Ortiz, Samuel Mills, Elijah Sanchez, Caden Hanson, Aaron Bonilla, Brandon Martinez, Jack Schneider, Blain Davis, Dominique Valerio, Lalo Hernandez, Jason Costilla, Kolt Hackebeil, Xavier Garza, Wyatt LaFond, Seth DeLeon, Tanner Shields, George Saenz, Julian Gonzalez, Jacob Delaney, Adrian Beltran, and Corey Dirck.
Scoring recap
REF—32-yard run, 2pt-conversion pass good, 0-8, 1:59, 1st.
REF—62-yard pass, conversion failed, 0-14, 8:08, 2nd.
DEV—Gus Puente 5-yard run, Jonathan Weinkam 2-pt conversion run, 8-14, :16, 2nd.
DEV—Luke Friesenhahn 27-yard run, Elijah Sanchez 2-pt conversion run, 16-14, :47, 3rd.
REF—45-yard pass, conversion failed, 16-20, :07, 3rd.
Up next
The JV plays Uvalde Thursday, September 3 at Warhorse Stadium. Kickoff is set for 5:30 pm.
By Jerel Beaty
Staff Writer