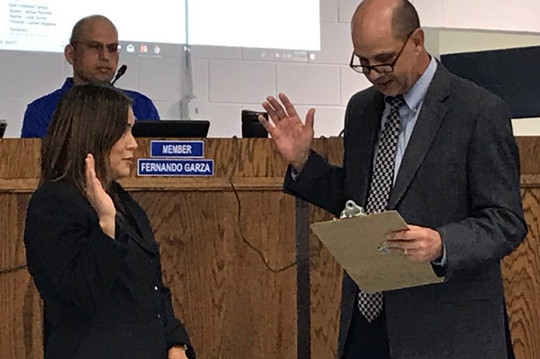 Returning trustee Gordon Gentry and newcomer Mireya Vanderslice were sworn into the Natalia ISD School Board during the regular meeting of that governing body on Monday, November 11.
Vanderslice and Gentry won their seats in the election held last Tuesday, Nov. 5. Vanderslice garnered the most votes with 197 (28.68%), followed by incumbents Gentry with 180 votes (25.97%) and Jack Bradley, Jr. with 175 votes (25.47%).
Former Board member Eric Owens received 89 votes (12.95%), while challenger Shad Heinis received 46 (6.70%).
A total of 687 votes were cast.

Board President Eric Smith praised Vanderslice for her attendance at Board meetings over the past year.
“Any time somebody signs up to come and run for office, I always think it’s great that somebody like this young lady comes out and sees what’s going on in the district,” Smith said, adding that Vanderslice was enthusiastic about her new role and eager to make a difference.
Gentry initially served on the Board from 1990 to 2000 before returning in 2018 to fill a vacancy after Owens’ resignation.
“He came back to help us, and I appreciate all the hard work, energy, and effort,” Smith said.
Smith also thanked Bradley, who did not attend the meeting, for his service on the Board.
After Gentry and Vanderslice were sworn in by Medina County Precinct 2 Judge William T. Tschirhart, Jr., the Board appointed Gentry to replace Bradley as Secretary. Tiffany Rodriguez and Smith were reappointed to their positions as Vice President and President.
By Marly Davis
Staff Writer