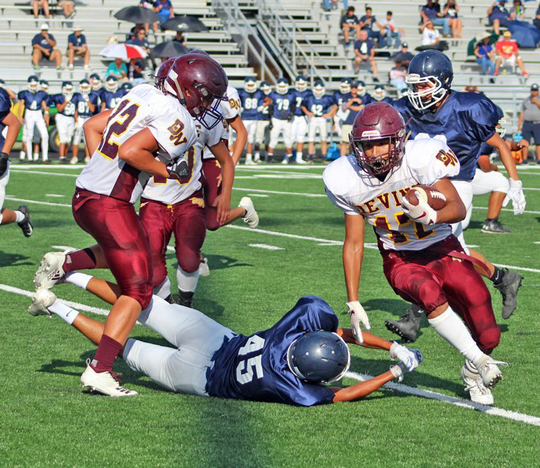 The Devine Warhorse freshman team should be feeling confident going into their District 29-4A opener against Hondo on October 10. The Horses played near-perfect football in routing the Central Catholic Buttons 27-0 last Thursday in San Antonio.
This game was never really in doubt. Devine scored on its first possession on a 10-yard run by Marcus Rodriguez. Rodriguez converted the two-point run as well to race out to an 8-0 lead.
In the second quarter, quarterback Jaiden Burford scored from 6 yards, bumping Devine’s lead to 14-0. That score carried into the halftime break.
Camden White stepped in front of a Button pass attempt and returned it 61 yards up the right sideline. The Horses were in charge at 20-0.
Devine’s last score came after a 41-yard scramble by Burford to get the ball to the 10-yard line. Rodriguez scored once again soon thereafter. Oscar Gelacio Abrego converted the point after an attempt to close out all scoring and securing the Warhorses 27-0 victory.
Coach speak
Juan Gonzalez—“Camden White with a defensive interception and ran it back for a touchdown. Blaine Davis has a defensive interception off a batted ball by defensive end Aiden Zapata. Marcus Rodriguez had two quarterback sacks. The whole defense played well. We flew to the football and played aggressive. There are still some things to work on, but I am proud on the ‘D’ side and looking forward to district play.”
Bart Oropeza—“We came out pretty confident after a great week of practice. Marcus Rodriguez scoring our first touchdown and 2-point conversion got us going early. Jaiden had a 41-yard rushing play that was big for us as it set us up Marcus’s second touchdown of the game. Then Jaiden scored his second touchdown and Oscar Gelacio Abrego kicked a successful extra point. Other players with big plays and big runs were Blain Davis, Aiden Zapata, and Iggy Cisneros. We are thankful for this open week. It will give us some extra time to get ready for our fist district opponent Hondo.”
By Jerel Beaty
Staff Writer