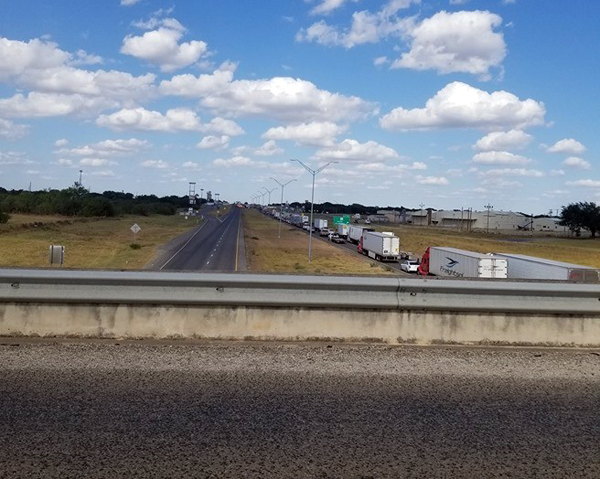 Devine VFD, Natalia VFD and the towing company on scene all worked together to extricate the driver trapped underneath this big rig. The one-vehicle rollover accident occurred last Friday, September 29 on I-35 Southbound just outside Devine around 2:30 pm.
“It took us every bit of an hour to get the driver out, as he was trapped underneath the truck,” said Devine Fire Lieutenant Byron Hruzek. “The driver was pinned between the steering wheel and dash of the truck. We had to use the tow truck and Natalia’s heavy duty truck to pick the cab up off the ground, so we could get him out. I want to give a big thanks to them….The driver lost a lot of blood during the extrication and it would have taken a lot longer to extricate the driver without their help.”

Devine VFD had three back-to-back calls that afternoon.
“Once the cab was lifted off the ground, we gained access by removing the passenger door and structural part of the front cab,” Lieutenant Hruzek added.
The accident was just south of the Devine exit between mile markers 122 and 123.
The truck was headed south on I-35, hauling a load of tires. First responders were out there cleaning up for many hours, until around 9:00 pm.