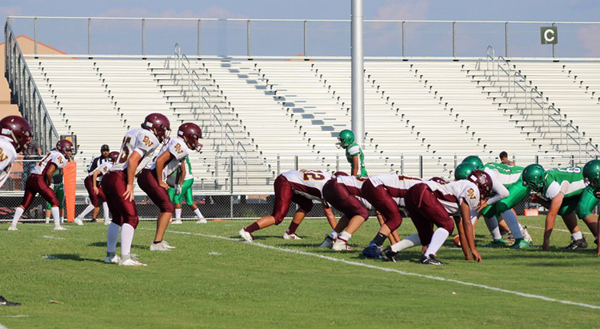 The Devine freshman team nearly pulled off one heck of a rally last Thursday in Pleasanton. After falling behind 6 to 24, the Horses rallied to score the last three touchdowns of the game. Unfortunately, their comeback attempt fell just short, losing the ballgame 22 to 24.
Down 8-0 going into the second quarter, Devine’s Marcus Rodriguez scored from 12 yards out to cut the deficit to 8-6 with 5:51 left in the second quarter. Pleasanton scored the next two touchdowns of the game and, this is the big kick in the gut, converted both two-point conversions to boost their lead to 24-6.
Devine fought back. Rodriguez scored on a 2-yard run with 2:48 left in the third quarter and Camden White followed with the two-point conversion to bring the Horses within 24-16.
Rodriguez scored on a long, 97-yard run with :41 seconds left in the third to close out the scoring at 24-22.
Coach speak
Coach Bart Oropeza—“We played a tough Pleasanton team on Thursday; we fell behind in the 3rd quarter 6 to 24. We fought back and scored two more times to make the score 22 to 24. I was proud of the boys for competing in the second half of the game, but we fell short. Marcus Rodriquez ended the game with 3 TDs. He had two rushing touchdowns already before he ran for the 97-yarder. Jaiden Burford converted two, two-point conversions for the game. We will work hard to prepare for Central Catholic this week.”
Up next
The freshmen take the field at Warhorse Stadium Thursday at 5:00pm.
By Jerel Beaty
Staff Writer