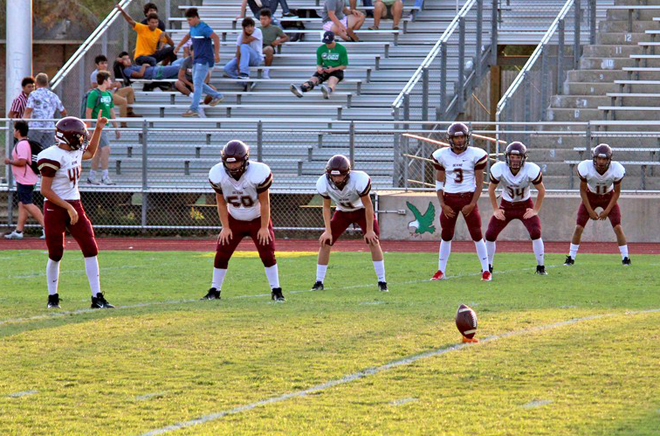 The JV Horses took an early 8-0 lead on the Eagles in Pleasanton last Thursday on a 3-yard run by Hayden DuBose and a two-point conversion by Sage Cruz. Pleasanton scored the next and final two-touchdowns of the game to pull out the 16-8 victory.
On the Horses last play of the game, quarterback Cody Trammel launched a pass toward Cruz who was falling backwards into the end zone. Many thought Cruz had completed the catch that would have pulled the Horses within a two-point conversion of tying the ballgame.
The officials ruled the pass incomplete, ending the game at the 8-16 final score.
Coach speak
Scott Taylor—“The JV played well. We started the game with only 21 able bodies finished with seventeen. Our offense controlled the clock and the defense created two interceptions (Sage Cruz, Hayden DuBose) and a turnover on downs. Robert Ramirez came back from being out last week to play linebacker that allowed Haydn Brumage to move back to defensive end. We battled hard but in the end came up short.”
Up next
The JV team plays at Warhorse Stadium Thursday against Central Catholic. Kickoff is set for 6:45pm.
By Jerel Beaty
Staff Writer