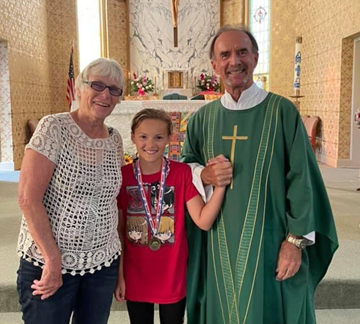 It is with mixed emotions that we say goodbye to Father Paul Cleary–who has surely put a million smiles on the faces of Medina County residents in his 25 years here. Father Paul is now getting ready to take it easy and enjoy being an “old geezer” after his last mass at Our Lady Grace Catholic Church in LaCoste this past Sunday, June 20.
Every Sunday morning, he filled hearts and our minds with thoughts of what we could do to make this world a better place. He had a gift of helping us all “rise above” the circumstances and challenges of our lives. He welcomed each and every person into the church with open arms and quickly and lovingly gave you a nickname.
Father Paul has been preaching for over 47 years in all.
His tenure in Medina County has been 25 years (11 in Hondo and 14 in LaCoste), and his tenure in Bexar County was 22 years. “Lucky me,” he said as we talked, too shy and humble for an interview. He also served as a volunteer fireman in the LaCoste community.
“Father Paul was definitely one of a kind,” said parishioner Stephanie Kohlleppel. “From his ‘dollars’ for birthdays and anniversaries to his relationship with the children in mass to his annual Mother’s Day serenade, you never knew what might happen during Mass. He welcomed families with babies and small children, the noise never bothered him.”

In fact, when a baby started howling in the middle of a sermon, Father Paul often ran to them and picked them up, taking them up to the front for all of church to see baby’s bright eyes and pretty smiles.
“His homilies were easily relatable to life. He had a way of taking the gospel, explaining it and applying it to everyday life,” Kohlleppel said. “He had a gift for putting you at ease whether during mass or special events. He invited people to take pictures and be directly involved in weddings and baptisms. He liked to know what was going on in ‘young people’s’ lives, often recognizing achievements during mass. Our Lady Grace Church was blessed to have him as our Pastor for the last 14 years. He is going to be greatly missed.”
I personally recall one day when I was late to mass, that I will never forget. The church was packed, standing room only, and I had newborn baby Tucker with me. It was just me, baby Tucker and my little girl A’Dell. I was fairly weak after having had an emergency surgery at Tucker’s birth, but I really needed to hear one of Father Paul’s sermons that day, so I was determined to stay. I thought I could sneakily sit down on the floor with the baby and just sort of lean against the back wall behind the crowd. But before I knew it, Father Paul stopped mid-sentence and looked right at me, immediately calling me to my feet and waving for us to walk up to the altar.
“Mother and baby, you will take my seat, please.”
Can you imagine? I was red as a beet, but with everyone waiting for us to comply, I wasn’t going to argue. So there we went up the aisle, and there we sat…in the priest’s seat.
I may have been embarrassed, but I was also in awe of his humility, compassion, and love.
For the whole mass he and Deacon Joe stood.
And they stand for so much.
One parishioner wrote this poem in Father Paul’s honor, and we have yet to determine who it is.
Reflections on Father Paul’s Service
Bible scholar, Birthday dollar
Challenges in homilies
Thinning hair, don’t despair
Include the kids in liturgy
Cowboys fan, golfing tan
Share his Irish family
Recognize the newly wed
Fire calls, get him out of bed
Holding babies, respecting ladies
Sing a song on Mother’s Day
Gift of gab, friend in need
Walk latrelle at elder speed
Many married, many buried,
Many baptized, memorably
Sunday mass, hear the bell
He did his job and he did it well
By Kayleen Holder
Editor