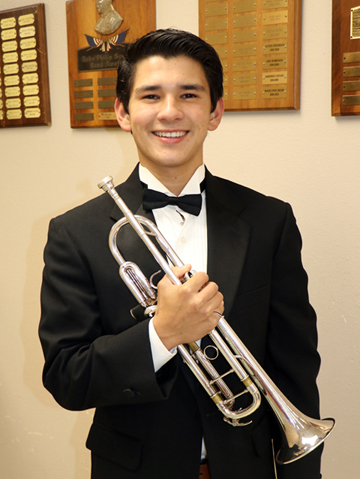 Warhorse Junior, Brian Schaefer, placed 1st in State! He competed June 9-12, 2021 at Melissa ISD and earned 1st chair trumpet in the 4A All-State Symphonic Band. This is Brian’s second year in a row to place in the All-State Band. Last year he was 9th chair and this year excelled even further and earned 1st!

“After the semester ended, we were able to focus on junior Brian Schaefer who had advanced from the All-Region and All-Area Bands to the ATSSB All-State 4A Band!! This is in and of itself a ‘major’ accomplishment,” said Jeff Miller, Devine High School Director of Bands.
“Normally the All-State Bands for TMEA/ATSSB meet and then perform Concerts at the annual TMEA Convention in February in San Antonio each year. This year the parent organization TMEA decided to “cancel” the convention and the All-State groups. The leadership of ATSSB (the 1A-4A membership) decided to proceed with the All-State groups on June 9th-12th at Melissa ISD near McKinney to offer their new and amazing facilities to host the events. It was really unbelievable to see all these HS students from across Texas converge after school was out to work so hard with their talented and nationally know conductors to produce such mature, demanding, and challenging concerts…..WOW! ” said Miller.
Miller went on to explain, “The first night is always somewhat stressful as there are ‘chair’ auditions for each section. Within Brian’s section – trumpets – there were (16) very talented players who had clawed and scratched their way through all (33) Regions and then (5) areas to make it to this point. Brian stayed cool under pressure as he is a very savvy performer. Following auditions, students made their way to the Student Union for dinner and results which would be posted on the windows. We talked about the different players in the audition and he analyzed his performance. Finally they posted the Trumpets – and Brian made his way through the crowd back to our table grinning ear to ear – and says “I made 1st Chair Mr. Miller!!!!” We were both in shock. What an incredible experience. As 1st chair Trumpet in the All-State 4A Band, Brian was now the BEST trumpet player in 4A in Texas -vs- literally a couple of thousand who auditioned along the way!”
They worked over eight hours a day until Saturday’s concert. Conductor and composer Brian Balmages brilliantly led an amazingly talented group to a very high level performance! Brian also had solo exposure and I believe had an experience of a lifetime!” said Miller.
“There is so much talent in the huge state of Texas and competition was tough. It was amazing to hear all of these talented musicians come together and form one band within a couple of days!” said Brian Schaefer.
Assistant Band Director Settles said, “We, as a band staff, are so very pleased for and proud of Brian and his ATSSB All-State accomplishments! We are so blessed to have his talents “on loan” to our program. Being a two time All-Stater, and first chair most recently, places Brian in a class by himself for the Devine trumpets.”

“It has been a genuine pleasure and honor working with Brian the past six years, and I know we’re both looking forward to next year’s “three-peat!” The really great part about that is when Brian puts his mind, and spirit, into it he has the opportunity to earn some scholarship monies from our state organization, the ATSSB. It’s a very exciting prospect!” said Settles.
“God sure has blessed him with many talents and it’s such a joy to witness what he is doing with them. All of his hard work in preparing and refining his tone paid off in this tremendous accomplishment!!! We love listening to the beautiful music that he makes and are so very proud of him!!!” said parents Brian & Veronica Schaefer.
He has also received, the Most Outstanding Freshman Award, the Band Directors Award as a sophomore and the Leonard Bernstein Musicianship Award as a Junior. In addition to his musical talents, Brian is President of his class, a member of National Honor Society, State winner on FCCLA Team, State competitor on the Debate Team, regional qualifier on Devine’s Varsity Golf Team and area qualifier on Devine’s Varsity Tennis Team.
“We are so fortunate to have such a supportive community, administration, and parents here in Devine who have all been key to all our successes – now and into the future! Our kids are lucky and I am humbled to be a part!” said Miller.