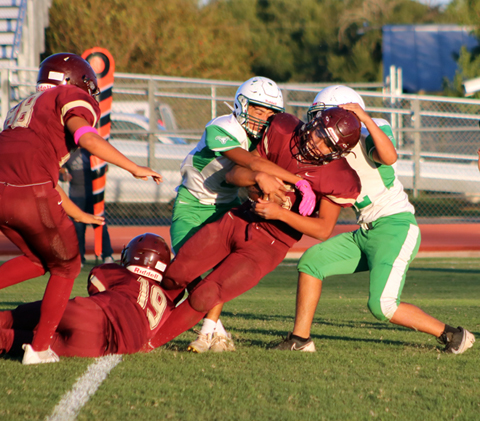 So close. The JV Warhorses were one victory away from completing an undefeated 2021 season; however Crystal City defeated Devine 22-18 last Thursday to close out their 9-1 campaign.
Devine took a 12-0 lead into halftime. After the first twenty minutes it looked like it was going to be “business as usual”, as Coach Heath Poppe has said previously after a victorious Thursday night ballgame.
This game took on a much different tone in the second half however as the Javelinas scored three touchdowns to Devine’s one in the Javelinas’ final twenty minute surge.
“Turnovers was the story of this game,” according to Poppe. “We had crucial fumbles in the 2nd half that swung the momentum into Crystal’s favor. We played well enough to win but just made crucial mistakes and crucial times.”
The loss did put a damper on the thoughts of a perfect 10-0 season, but the Horses still claimed the district’s championship in spite of the defeat as the Javelinas finished with two losses against league competition.
Devine took an early 6-0 lead on a Wero Torres 20-yard run on the Horses second possession of the game. In the second quarter, quarterback Jacob Rodriguez hit Eli Contreras for a 42-yard scoring strike to put Devine up 12-0 at the break.
One of the turnovers Poppe eluded to turned into six-points for the Javelinas in the third quarter. Crystal City scored on a 50-yard pass play to inch closer at 12-6 early in the second half.
Contreras had a nice return of the following kickoff, and Torres scored later from 37-yards out to give Devine what looked like a comfortable 18-6 lead.
Not converting any of the three two-point conversions came back to bite Devine in a big way however as Crystal City scored twice in the fourth quarter and converted both two-point attempts to pull out the 22-18 victory.
Final thoughts
Losing a game is one thing but losing a shot at perfection is a whole other ball of wax. The JV had to deal with a lot of lineup changes throughout the season as all football decisions are based on what is best for the varsity team, that’s just the way it understandably goes.
“Overall I am extremely proud of this group of young men. Anytime you have a great season like we did in spite of changing personnel from week to week to injuries and combining for the last three games, these guys have proven themselves to be great teammates to each other and gave the coaching staff total effort,” Poppe said in his season-closing comments.
Special thanks
I personally thank Coach Poppe for the information he supplied regarding his team’s accomplishments and performances throughout the season. He provided detailed scoring recaps, player highlights, and shared many of his own thoughts on his team’s challenges and successes.
My name is attached to the weekly JV articles in The Devine News, but they would not be as thorough or as insightful without Coach Heath Poppe’s post-game emails that he sends to me.
Thanks, Pop! You did your team, your players, and the Warhorse football program right!!
By Jerel Beaty
Staff Writer