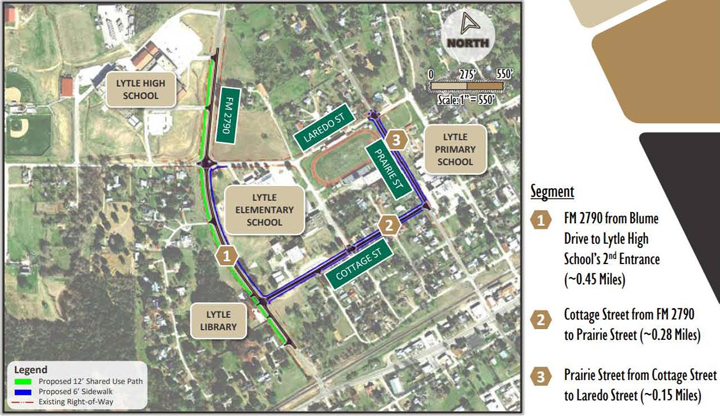 As the City of Lytle grows, council discussed how the 1,400 projected homes coming into new city subdivisions will require upping water capacity and sewer soon, to the tune of around $15 million dollars over the next five years. That was just one of many important items discussed at the Lytle City Council meeting this past Monday, November 8. Council addressed one of the more pressing needs for a water line currently in need of repair, and also discussed a law suit that has been filed against the city in Executive Session.
Some really exciting news was announced as well… Over $60 million in federal funds were set aside for various infrastructure projects in rural areas of the state, and the City of Lytle has been chosen to receive over $1.5 million dollars for local sidewalk projects (see more in separate article).
Citizens Comments
The first speaker was a citizen concerned about border issues flowing over into our communities, including high-speed pursuits.
“I’m here as a concerned father and husband,” he stated. “Unfortunately one of those incidents has happened in our back yard…..My question is–What are we doing as a City to address and get ahead of another unfortunate incident? Are we doing anything outside the normal, and if not, I am here to help.”
He stated that he is happy to volunteer in order to help be proactive.
Mayor Gonzalez stated the majority of pursuits are happening on Hwy 90 and I-35, while some unfortunately have come through the city. He noted that he is not aware of any break-ins or violent crime in the city from undocumented immigrants. He asked for input from Frank Reyes from the PD.
Reyes spoke briefly discussing the 3 incidents that the city has experienced, including an incident where several undocumented persons jumped off a train in the city, an arrest of a human smuggler with a female in the vehicle in May, and the incident where the fleeing vehicle ran into an electric pole.
Variances
Resident Curtis Miller addressed council to ask for a variance on 2790 for family that would like to be able to build a house on the other half of his property for relatives.
Next, council approved a variance to lot sizes in Rosewood Estates.
Developers stated they are asking for the variance to 294 lots out of the 540 lots they are proposing. He noted that the curbing and shape of properties made it difficult to keep lots 6,100 sq feet. Josie Campa noted that Planning and Zoning approved this variance, and council moved forward with approving it as well.
The city’s subdivision specs currently allow roughly 7 lots per acre, according to Councilman Cate.
Appraisal Board vote
After reviewing a few resumes, the council decided to vote as a whole to appoint Cindy Segovia to the Medina County Appraisal Districts Board of Directors, rather than individually voting for different candidates. The council is just one of many municipalities who will be casting its vote.
Waterline work
Next the council addressed the discussion on the water distribution line issue at Wisdom Road, which has gotten worse.
“We have a potential problem out there on Wisdom Road with that water distribution line. Because of the estimated cost we need to have the engineer look at it,” Councilman Charles Cate said. He noted that project is over $20,000 require it, according to law.
“This is the law, and we have to follow the law, the City Attorney advised. The council moved forward making a motion to have an engineer look at the project.
Council members have noted that if the line breaks, there are close to 2-3 dozen homes that could be affected, before the nearest shut-off valve.
Use of Force Policy
Lytle PD presented a model use of force policy taken from the Police Chiefs’ Association, which was approved by council.
“There are quite a bit of changes…This is the most comprehensive use of policy we have ever had,” Reyes said.
Council discussed the matter briefly, commending the police department on the great job they do, and noted and discussed the benefit of Lytle PD having car and body cameras as well.

Meeting dates changed
The council moved to “not schedule a second meeting in November or December” due to the holidays, leaving open the option to set a meeting if needed of course.
Budget Amendments
Council voted to proceed with several budget amendments.
Law suit filed
Council went into Executive Session to discuss a lawsuit filed against the City. No discussion was held afterward.
Water Well #4
The council discussed water well #4, which will most likely be done around the end of April or more likely June of next year.
“I just wanted to get an update, and make sure if anything else was need,” Cate said.
“The timeline looks like it’s going to be 240 days,” Public Works Director McGrath said.
Mayor Gonzalez noted, that they were shooting for 180 days from the first of November, but only if they were able to get the supplies in time. McGrath noted that they haven’t been able to, so the city should expect closer to 240 days.
Based off the engineer’s report of water capacity (done in 2019), the council discussed the steps they need to take to prepare for growth. In all, three new subdivisions are projected to build out close to 1,400 homes, which would easily double the population of Lytle.
“They say what we need is a new elevated storage tank,” Cate said. “We have to figure out how we are going to pay for this stuff.”
He noted, “This well that we are just finishing up has taken us what, 3 to 4 years to do (but closer to 5 years from first conceptions to projected finish date)….And that report done in 2019 is not factoring in three new subdivisions, it was just two. It doesn’t include Rosewood, and we are tossing in more homes and more connections into our system…..We probably need to start figuring out what’s our next project besides this well, because it’s going to cost money.”
Mayor noted that thankfully well #4 will be producing a little more than they initially thought it would.
“It’s important, I fully understand you Charles, and we do need to get things lined up correctly,” Mayor Gonzalez said. He also noted they need to prepare for waste water capacity.“They said at 400 homes, we hit the 75% capacity rate for the waste water treatment plant.”
“At 75% percent capacity, we need to start drawing plans, at 90% we need to be starting construction,” McGrath noted.
Right now the city has 39 permits going for the Saddleridge subdivision.
“It’s just a matter of time. What did Rosewood say today? 548 homes, and you got 375 coming out of Saddleridge, so yeah, it might be good to start talking to TRC,” Mayor Gonzalez said. The third subdivision, Lytle Farms, is expected to build up to 500 homes.
“The other page I want us to pay attention to, is talking about how costs (of infrastructure needs) are going to increase slowly over time,” Cate said. “Within 5 years, we need over $15 million dollars.”
He clarified after the meeting, “That is the engineer’s opinion of probable cost for projects we will need to do to accommodate the growth that’s already projected. For example, water, sewer. A big portion of that is an expanded wastewater treatment plant that is projected to cost around 9.6 million. Of course, again, we have to remember this report was done in 2019 and doesn’t even include the homes from the newest subdivision.”
As the population of Lytle grows, the need for emergency services (such as EMS) and infrastructure also grows.
“We have an obligation not to just drive growth, but also to take care of our folks that have lived here for years or all their lives,” Cate noted.
Police Chief Richey Priest stated that his department in good shape, “We have been building and preparing the foundation for this for a long time. We currently have 9 full time officers, with the 9th one being added last month.”
He noted that commercial development affects call volume more than residential does. However, he noted that while the police department is covered under the city budget, the fire department and ambulances are not funded by the city. The fire department is funded by an ESD (a political subdivision of the county) and the ambulance that services the city is funded by Atascosa County.
Street named in honor of coaches
Council voted to re-name Easy Street in honor of two Lytle coaches whose dedicated service is so appreciated. The street will be named Ruiz-Foster Way in honor of Coaches Gilberto Ruiz and Hadley Foster.
By Kayleen Holder
Editor