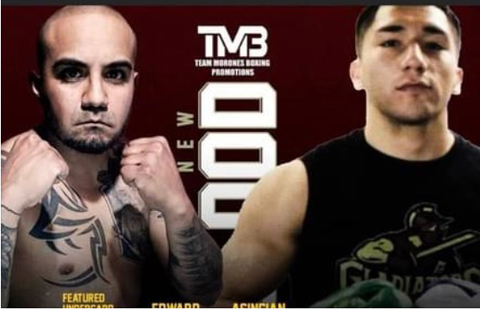 A local Devine man, Edward Curiel, is making his Pro Boxing debut in San Antonio in a couple weeks and his family is encouraging the community to get behind him by attending the boxing event as he attempts his dream of being a Pro boxer.
Edward “Bad Boy” Curiel, 35 years old, is a 2005 graduate of Devine High School, born and raised in Devine. He enjoyed his time on the Warhorse baseball team. Edward is a self-employed home builder and works sun up to sun down.
He is the son of Edward Curiel, Sr. and Celina Rodriguez & step-son of David Rodriguez, all of Devine.
Edward is a 2009 Golden Gloves Champion and is making his Pro debut in San Antonio, Texas on Saturday, March 12, 2022 at The Scottish Rite Theatre downtown.
“If you would like watch Edward box during his first pro fight (debut) this is your chance to see him and show support for his pro career. The more support he has in the audience it always helps fuel his determination and desire. We appreciate everyone who can make it and look forward to watching him continue his dream of being a Pro Boxer”, said his mother Celina.
Edward started boxing in his early 20s and has fought numerous Golden Glove Boxers along the way to his Pro debut.
Doors open Saturday, March 12 at 6:00 p.m. with the first bell at 7:30 p.m., downtown San Antonio, Texas at The Scottish Rite Theatre. Tickets are on sale now for the events which includes multiple fights. Upper level Orchestra seating is $40 and lower lever Orchestra seating is $70. For tickets contact Edward Curiel at 210-404-5932 or 210-707-2413.