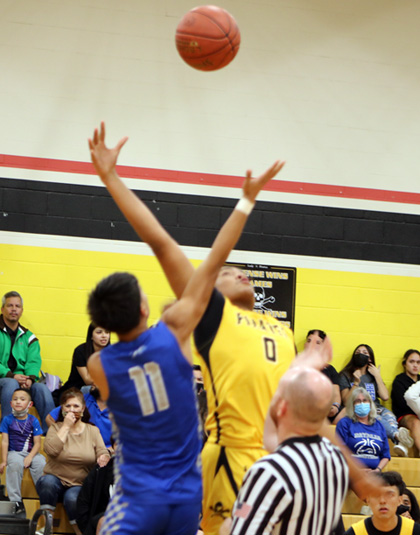 The Lytle Pirates added two wins to their district record this week and one of those wins was number 100 for Head Coach Jacob Hernandez! Now in his 6th year at Lytle, all of these wins happened with the Lytle program he rebuilt. Before coming to Lytle, the Pirates had only won five games in four years. Now 9-1 in district, the Pirates sit right behind Poth and above Dilley. After facing Poteet last night, they will have a bye this Friday and will play Cotulla on February 1st and Poth on Friday, February 4th.
Natalia headed to Lytle on Tuesday night and after four long quarters, the Mustangs were sent home with a loss, 30-89. The Pirates pressed hard and the Mustangs could not keep the ball in possession long enough to make it down court very often. Only allowing two points in the first quarter, Lytle set the pace of the game early and continued it through the whole game.
“With the stands full on both sides, Coach Tope announcing, and the drumline playing, the atmosphere was electric. The Pirates came out pressing from the beginning, smothering every player on the Natalia side anytime they touched the ball leading to a 24-2 first quarter. The defensive pressure was so intense by all ten players that they held Natalia to only 7 points in the first half. That is team defense at its finest. Offensively, the Pirates were led by Junior Jordan Balderaz with 20 points and 12 rebounds. For the first time in his career, Balderaz had a thunderous dunk between two players in the 3rd quarter that made the produce in our local HEB come off the shelves. Junior Malakai Castro had 16 points with 12 of them being from the three-point line. The Pirates finished off the last two minutes of the game with our five Seniors, Joe Cortez, Bryson Duty, Caleb Wood, Daniel Aguirre, and Damian Garcia putting the finishing touches on the 89-30 victory over the Natalia Mustangs. It was a great team win overall,” stated Coach Jacob Hernandez.
Aguirre 2 points, 2 rebounds, 2 steals. Malakai Castro 19 points, 3 rebounds, 2 assists, 5 steals. Bryson Duty 8 points, 6 rebounds, 1 assist, 2 steals, 1 block. Jaeden Guevarra 12 points, 1 rebound, 1 assist, 2 steals. Damien Garcia 6 points, 1 rebound, 2 assists. Balderaz 20 points, 13 rebounds, 2 assists, 1 steal, 1 block. Eli Vega 4 points, 4 rebounds, 1 assist, 3 steals. Caleb Wood 11 points, 8 rebounds, 1 assist, 1 steal. Joe Cortez 7 points, 3 rebounds, 4 assists, 4 steals.
The Pirates went on a 5-0 run on the Indians to start the game Friday night. Jourdanton closed the gap with half the quarter left at 8-6. Lytle stopped their short scoring run and closed them out to win the quarter 13-8. To score the last three points of the quarter for Lytle, 1 sank a three-pointer from the corner.
A long pass from 4 to 1 and the Pirates were up 15-8 in the beginning of the second. Another from 1 and the Pirates led by 10. Lytle continued to break up the Indian defense and steal balls. Bryson Duty stole the ball and the Pirates would be up 26-8. In the last minute of the half, Lytle ran the ball running an offense. Jourdanton took the rebound down court and was fouled shooting a three. He sank one of this three free-throws and the half ended 31-13.
The Pirates came out aggressive in the half, a long pass from 0 to 3, and the Pirates earned lay-up. Throughout the third, Lytle continued to play their basketball game and the gap between the two teams increased to 50-29.
The fourth quarter continued the Pirate power show. Malakai Castro opened with a three-pointer and after being fouled Eli Vega sank both of his free-throws. Another 3 from Castro and Lytle led 58-31. Jourdanton earned a few points but Lytle was quick to answer. Within a minute Lytle scored 11 points from a jumper from Vega, a lay-up from Matt Sanchez, shot and a free-throw from Vega, lay-up from Sanchez, and two from Damian Garcia before Jourdanton called a timeout. Lytle pushed hard and won the game 80-48 for their fifth win in a row!
“From the tip off, the Pirates defense was on full display. The defensive pressure from baseline to baseline was the best it’s been all season. Every dribble, every pass made by a Jourdanton player was suffocated by two Pirates at all times pressing all game. The Pirates relentless defense held the Indians to 13 points in the first half. Offensively, Castro led all scorers with a career high 24 points while missing the majority of the 4th with a swollen nose due to an elbow battling for a rebound. The kid was unstoppable all night hitting four 3 pointers and making lay-up after lay-up. Vega had 19 points and some of the most impressive rebounds and lay-ups you will see for a guy his stature. He may be small, but he plays above the rim. The boy’s energy and hustle on the defensive side led to career win 100 for my coaching career. I can’t thank them enough for their hard work and dedication, as well as the past players who have played for me over the last six seasons to help me reach this milestone,” added Coach Jacob Hernandez.
Q1 13-8, Q2 31-13, Q3 50-29, Q4
By Dicy Chambers
Sports Writer