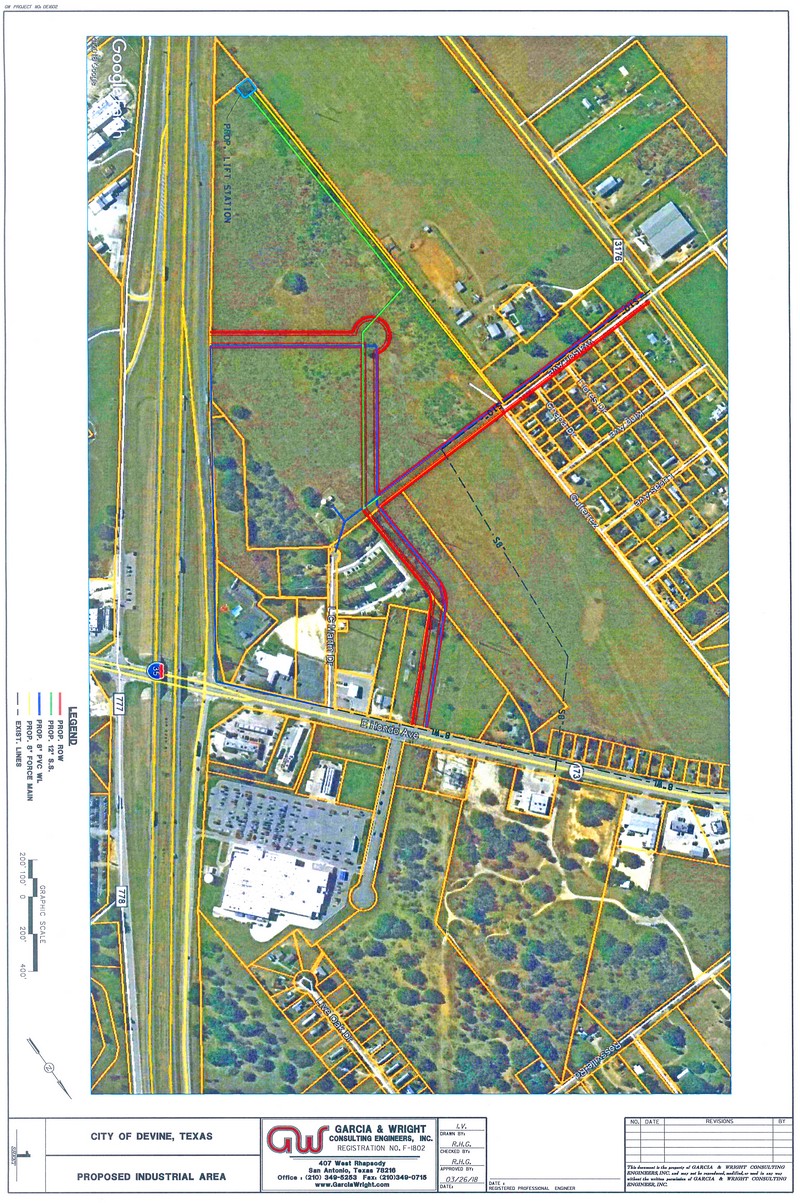 The TIRZ zone in question is the grassy, undeveloped land between Triple C and the IH-35 access road. The purple line above shows the path of the proposed thoroughfare through the City’s property, while the red line indicates the proposed right-of-way. The construction of the thoroughfare will require the purchase of private property.

The Devine City Council voted to apply for federal grants in order to construct a thoroughfare through approximately 43.58 City-owned acres of land that fronts IH-35 in an attempt to open the space up to development.
Additionally, Mayor Cory Thompson was granted the power to inquire about and negotiate the purchase of privately-owned land surrounding the City’s property.
The decisions came during a Special meeting on Tuesday, November 13, after consultant Lance Elliot and City Engineer Raul Garcia presented a proposal for the area that included the construction of the thoroughfare, water and sewer lines, and a new lift station.
The thoroughfare will provide ingress and egress to the City’s property from Hwy. 173, County Road 3176, and the IH-35 access road.
The property is in a Tax Increment Reinvestment Zone (TIRZ), which is an area where Tax Increment Financing (TIF) is used. A TIF is a public financing method where future property tax revenue is diverted and used to subsidize costs associated with economic development.
The City and Medina County are part of the TIRZ at a 70/30 split, with the City prepared to reimburse developers up to 70 percent of their infrastructure costs.

“The road that your engineer has designed will open up the property to be developed, and it will create corners that are available for different uses,” Elliott said. “And it will also open up the property for future residential, future commercial, future industrial.”
Garcia’s design calls for the thoroughfare to be 40 feet wide with an 80-foot right-of-way, which will accommodate 18-wheelers.
“It will open up that [43] acres, and then the City can start actively marketing that property to be sold,” Elliott said.
Garcia’s estimate pegged construction of the thoroughfare, lift station, and water and sewer lines at around $3.5 million.
“But one thing that I must mention is that you still will need to buy some property to complete this thoroughfare going into 173,” Garcia said.
The City plans to apply for a grant from the Economic Development Agency (EDA) as well as the United States Department of Agriculture (USDA) to help pay for the planned improvements.
Thompson asked if breaking the 43 acres into smaller parcels would help with development, and Elliot said that it would.
“We might end up with, for example, where the road comes to the 35 access road, we might have some one-acre parcels available for a certain type of development, where on the interior, we might have five-acre tracts available for other types of developers,” Elliot said. “Along the top of the property, we might have a 12- or 15-acre tract for maybe a multi-family user, if somebody comes along for that.
“What your engineer has done is given you an ideal layout, and then from that, he will help you break it up into tracts for users.”
Additionally, Elliott explained that because the property is in a TIRZ, developers have an incentive to add additional roads themselves if necessary, because they can be reimbursed out of the TIRZ itself.
“We can reimburse them for that street out of the TIRZ money, the tax money that’s going to be generated off their property,” Elliott said. “We don’t want to give them any of the TIRZ money that’s been generated from someplace else, but if somebody comes in and they’re going to be going on the tax rolls for a million dollars that’ll be generating $40,000 a year in taxes, we’ll be glad to give you the $40,000 for five years to pay for the road.”
Garcia used to work with the EDA, and explained that during his time there, 60/40 and 80/20 grants were issued depending on the situation.
“Normally what they would base it on is the number of jobs [created],” Garcia said.
A motion by District 5 Councilwoman Debra Randall and District 2 Councilman Steve Lopez to apply for any grants available from the EDA, USDA, or other sources in order to construct the thoroughfare, and to pay for any application fees through money in the TIRZ fund, passed 3-0, with District 3 Councilman David Espinosa’s support.
District 1 Councilman David Valdez and District 4 Councilwoman Jennifer Schott were absent.
Upon returning from Executive Session to consider acquiring additional properties in the TIRZ zone, a Randall-Espinosa motion to give Thompson the authority to negotiate for the purchase of private property in that area passed 2-0, with Lopez abstaining.
By Marly Davis
Staff Writer