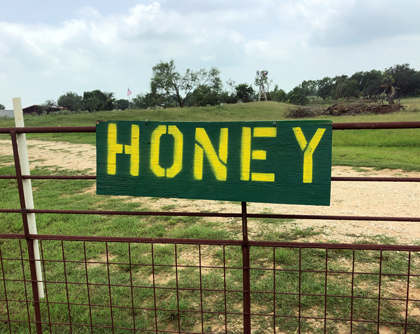 A local beekeeper had a box carrying somewhere between 40 and 50 thousand bees stolen, along with a sign on his front gate advertising honey. He’s now offering a $2,000 reward for the arrest and conviction of the bee thief.
On the morning of Sunday, May 30th, Bill Slay discovered one of his homemade signs advertising his honey farm had been stolen. He checked his security cameras to find that they had captured a man walk up and take the sign.
“We have some pretty low quality cameras at the gate, but we made him out on it. He came up to the gate around 1 to 2 o’clock in the morning.” Slay said. “Unfortunately, another one of my signs was blocking his face so we couldn’t see who it was. It wasn’t until Monday when Joe called me that we had found out that he had taken a box of bees.”

Mr. Slay’s neighbor, Joe Caddell Sr. had just gotten home from work when he saw a white SUV or Jeep with black rims and wheels back up to Slay’s gate, a detail that hadn’t been captured by the camera. A young man, around 20, hopped out from the car, jumped the fence and grabbed one of Slay’s bee boxes.
“I started hollering at him and he hauled to the back of his SUV,” Caddell said. “I went to my truck to find a flashlight to see his license plate, but he was hauling off so fast I never got a look. He was going so fast that he couldn’t even stop at the stop sign at the end of the road and he almost rolled over.”
The box that was stolen was valued at $320 with its 40 to 50 thousand bees. In a year, one box can produce 200 pounds of honey a year. With honey costing $10 a pound, that’s $2,000 of revenue gone. Stealing bees is a surprisingly common issue among beekeepers. ‘Bee rustling’ as it’s known has been on the rise right alongside the growth of demand for bee farms, especially with the issue of colony collapse exploding in 2006. Individual farmers have lost billions of dollars worth of hives in the last few years.
For more information on the reward, call 830-423-7107.
By Noah Davila