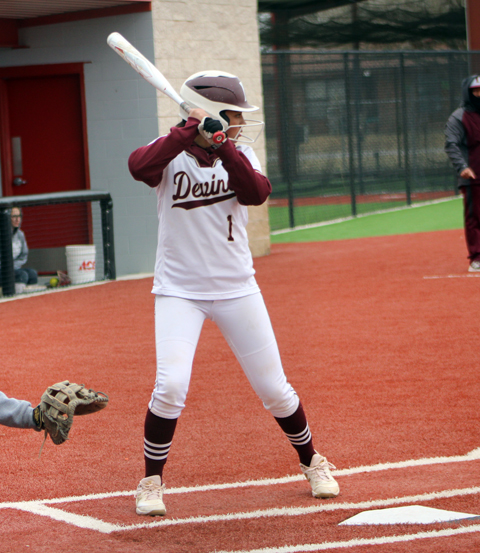 Now 5-10 for the season, the Devine Arabians were 2-2 last week after facing Cornerstone Christian and competing in the Natalia Tournament. Last night the team faced D’Hanis and next Tuesday they will play at Incarnate Word. The Arabians’ next home game will be against Somerset on March 25th.
Hosting Cornerstone Christian on March 1st, the Arabians tied the game 1-1 in the bottom of the first but then the Lions scored 6 runs in the second and Devine could not catch back up. Cornerstone won 12-1. Mackayla Perez led first pitch strikes with 9 and Skylar Blanton threw 8.
Thursday morning, Devine opened their tournament play against the host, Natalia. Taking the lead 1-0 in the bottom of the 2nd, Devine fell behind by 2 runs after Natalia scored 3. Not wanting a repeat of Tuesday, the Arabians worked hard and scored 5 runs in the bottom of the inning and took the lead 6-3. Natalia managed to score 1 run in the top of the 4th but it was not enough and Devine took the win 6-4.
Natalie Valle had 2 hits and 3 RBIs against Natalia. Rylee Esquibel earned a hit and 2 RBIs. Perez pitched and with 7 first pitch strikes and 1 strike out she earned a WHIP of 1.64.
Saturday, the Arabians faced Uvalde and fell 10-0. With no hits and 8 errors, Devine learned where a few weaknesses are and what needed to be changed before their next game. Perez pitched all five innings with 21 first pitch strikes.
In their final game on Saturday, the Arabians turned the tournament around and beat Cole 18-0! Taking a 3-0 lead in the first, Devine scored 4 runs in the 2nd, 6 in the 3rd, and 5 in the 4th.
Blanton pitched for Devine and only allowed 1 hit and earned 5 strikeouts with 7 first pitch strikes and a 1.33 WHIP. Airyanna Rodriguez had 4 hits and 3 RBIs, Valle had 3 hits with 3 RBIs, and Allison Dugosh earned 2 hits with 3 RBIs. Valle, CC Martinez, and Denise Contreras each earned a walk.
This was the Arabians last tournament of the season and with just three games left before district, Devine still has time to work out the kinks before they face Pleasanton on March 22nd.
By Dicy Chambers
Sports Writer