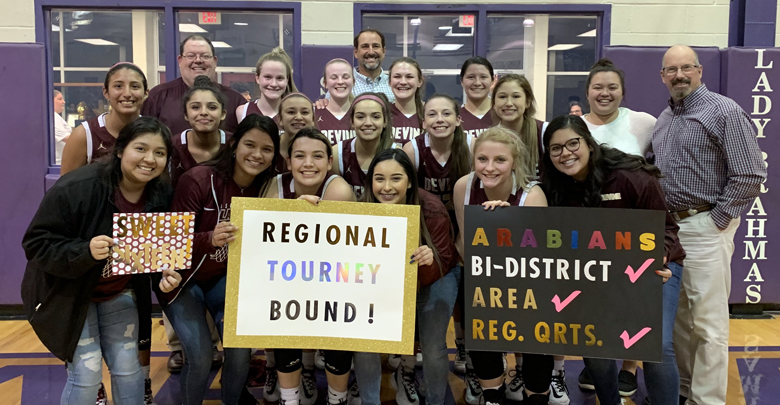 The Arabians ended another impressive basketball season this year after making it all the way to the Regional Semi-Final Game where they fell to Fredericksburg 39-73 Friday night. Before they faced Fredericksburg they beat Beeville in the Regional Quarter Finals last Tuesday winning the game 47-35. They ended this season 28-8 as Bi-District, Area, and Regional Quarter-Final Champions and look forward to next season to go even further!
I was super proud of the way the girls competed against a very good (ranked 3rd in the state) Beeville team. We started off a bit slow on the defensive end against Beeville. We struggled to get the ball out of the hands of their 6’3″ post and she was able to score early in the game. We did a good job though of keeping the Beeville 3 point shooters from getting good looks in the first half. We also did a really good job of making plays and shots offensively in the first half to stick around and keep the game close. In the 3rd quarter, we came out and got things going. Defensively we were really sharp allowing Beeville only 4 points in the quarter. We did a really good job of getting the ball out of the hands of the big girl and we also did a great job of closing out on shooters and forcing tough shots. We did a great job on the boards as well. We also got the offense going as well. We got out in transition and then when we set up our offense, we executed well. Everyone chipped in and made plays. We really executed well on both ends and that allowed us to put together a nice quarter and take the lead in the game. In the fourth quarter we continued playing well on both ends of the ball. We really executed well in slowing the game down and we made some huge shots when needed. Defensively we got key stops and were able to hold on to pull off the big win. It was a great team effort and everyone was super excited to get the hard fought win and advance to the regional tournament.
Points: Lacey Shook 1, Macey Hein 19, Megan Runyan 6, Maddie Mata 9, Clarissa Zamora 12. Rebounds: Shook 1, Hein 3, Runyan 9, Mata 5, Zamora Ally Taylor 4. Assists: Hein 2, Mata 3. Steals: Hein 3, Runyan 1, Mata 4, Taylor 1. Q1 11-12, Q2 20-24, Q3 34-28, Q4 47-35. FTP 64%.
I thought we played a good, aggressive first half vs Fredericksburg. We went into the game knowing that we would see pressure and we did a good job of handling that pressure early in the game. We played aggressively, but we turned the ball over a few too many times and we gave up some offensive rebounds that hurt us in the first half. In all, I thought we played really well in that half. We missed some good shots early and that hurt us a bit as well. Fredericksburg played really well and capitalized on lot of possessions. We did get into a little foul trouble in the first half, but we managed it and got to the half with the game still manageable. In the second half we struggled to get things going on offense. We made some good plays defensively but we were unable to convert on the offensive end. Foul trouble came back to hurt us and Fredericksburg took advantage of that as well. Although the score got out of hand in the fourth quarter, I was very proud of how the girls played. They played hard and they were aggressive looking to attack Fredericksburg. Unfortunately it just didn’t work out for us in the Regional Semi-Final game.
Points: Shook 1, Hein 8, Yessika Garza 2, Runyan 7, Mata 7, Zamora 10, Taylor 3. Rebounds: Shook 4, Hein 3, Garza 4, Runyan 6, Mata 3, Zamora 2, Taylor Janaee Wofford 1. Assists: Hein 5, Runyan 2, Mata 3, Mata 3, Zamora 2, Taylor 1, Wofford 1. Steals: Shook 1, Hein 5, Runyan 2, Mata 2, Zamora 1. Blocked shots: Hein 1. Q1 19-23, Q2 26-36, Q3 36-53, Q4 38-73. FTP 65%.
In all, we had a fantastic season. The girls did a great job of growing and improving throughout the season. They really took some big strides forward in the journey of becoming a really good, championship team. They overcame some adversity during the late part of the season, but they came together as a group, bought in to the process, and overcame that adversity to make a great run in playoffs. We will miss our seniors next season, but we have several players coming back and this was a great learning experience for those returning players. In all, I am super proud of all that this team accomplished. This playoff run was definitely filled with many memorable plays and games. It was exciting and a pleasure to be a part of…I will really miss the excitement this team provided.
By Coach Jim Sessions