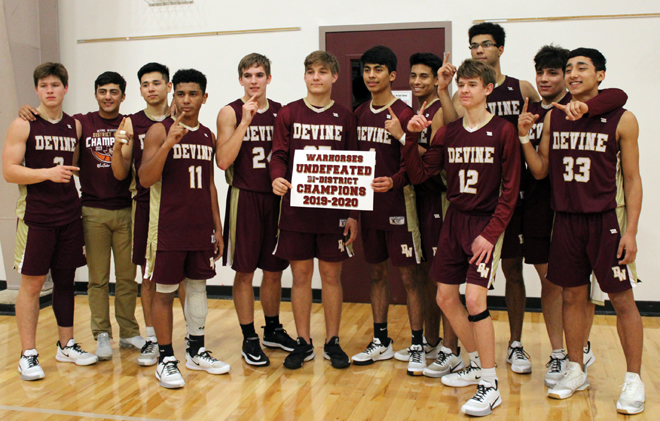 The Warhorses have ended their season 22-10 and are the District and Bi-District Champions! It has been another great season under the leadership of Coach Paul Wells and his senior players, Sergio Martinez, Kame’ren Adams, Mason Burford, and Dalton Kramer. After being undefeated in district, they moved on to face Navarro in the Bi-District Playoff game Tuesday, February 25th, they moved on to face Port Isabel on Friday February 28th.
The Warhorses started off s little slow against Navarro but quickly picked up the pace in the second quarter. They increased their lead from 2 points to 13 but the half with helps of Justin Contreras 5 points, and Adams 3 of the teams 16. In the their they outscored Navarro 19-6 with Kramer scoring 5, Martinez 3, Burford 4, Matthew Madrid 1, Adams 2, and Contreras 4. They had the lead at 43-19 at the end of the their but they continued to push in the fourth for a big win at 58-24 to move on to the Area playoff game. Kramer 6, Jose Dozal 5, Martinez 10, Burford 9, Weston Byrd 2, Madrid 1, Adams 9, Contreras 9, Colin Dishman 2. Q1 8-6, Q1 8-6, Q2 24-11, Q3 43-19, Q4 58-24. FTP 52%.
Port Isabel came in second in their district and beat King 58-53 to face Devine at Area. Devine was up 22-20 at the half and fell to 32-42 by the end of the third. With time running out and the pressure on, Devine tied the game up at 50-50 to force overtime. The crowds on both sides were into the game as much as the players were and overtime was under way. Devine gave Port Isabel too many shots at the free throw line and lost 50-53 in one of their best games of the season.
Kramer 5, Martinez 3, Burford 15, Adams 8, Contreras 19. Q1 10-5, Q2 20-22, Q3 32-42, 50-50, QT1 50-53. FTP 43%.
“Kids played outstanding defense and rebounded like crazy,” Coach Paul Wells said. “They gave 100% effort in both games and just fell a little short to a good Port Isabel team. I’m very proud of what these guys have accomplished all season long. One of my all-time favorite teams to coach and be a part of their lives.”
Port Isabel moved on to face Pleasanton last night in Kingsville. Pleasanton beat Pearsall and Sinton to get to the Regional Quarterfinal game.
By Dicy Chambers
Sports Writer