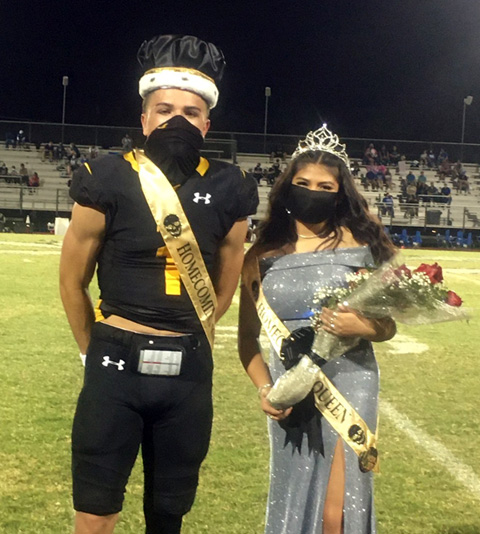 Lytle High School held Homecoming festivities last Friday, October 9th. Seniors Carson Aldrige and Clarissa Ybarra were crowned King and Queen.
The Senior Class was represented by four couples. Three couples were the Noble Valets and the Ladies in Waiting to this year’s Royalty Night King and Queen. Our first senior couple was Clarissa Ybarra and Carson Aldridge. Clarissa is the daughter of Melodie Criado. Clarissa is involved in the National Honor Society and is an athletic trainer. Carson is the son of mother and stepfather Nadine and Lane Bales and father and stepmother Richard and Christine Aldridge. Carson is involved in football, basketball, and track. He loves hanging with friends on the weekends and is active in his youth group. Thank you, Clarissa Ybarra and Carson Aldridge for representing the senior class so well.
The next senior couple was Raven Perez and Julian Rosas. Raven is the daughter of Lupio and Monica Perez. Raven is the boys basketball manager, also is an active member of the National Honor Society. Raven plans to attend Palo Alto College to start her path to become a physical therapist. Julian is the son of Andrea and Joan Rosas. Julian has completed 3 years of dual credit plumbing. Julian plans to pursue a career in plumbing after high school. When he turns 21 he would like to enter the police academy. Thank you, Raven Perez and Julian Rosas for representing the senior class so well.
The next senior couple was Mariana Verdeja and Santiago Garcia. Mariana is the daughter of Maricela Hernandez. Mariana is involved in cross country, track, band, President of the National Honor Society, and Treasure for the Class of 2021. She is active in outside church activities. Santiago is the son of Norma De Luna and Jorge Garcia. Santiago is part of the varsity football team and plays linebacker and defensive end. Santiago participates in track and plans to attend St. Philip’s College after high school. Thank you, Mariana Verdeja and Santiago Garcia for representing the senior class so well. 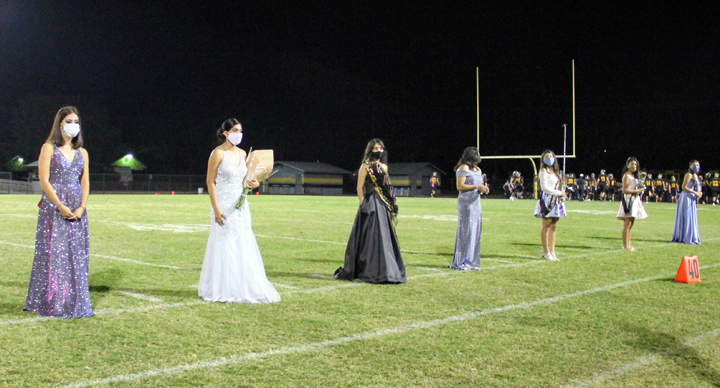 The final couple to complete this year’s Royalty Night Court was Naomy Guisell Montes Rodriguez and JoseCarlos Hernandez. Naomy is the daughter of Esmeralda and Rodrigo Montes. Naomy is part of the varsity cross country team and a dual credit student. Outside of school, Naomy is involved in many areas of her church, St. Andrews Catholic Church. In the church community, Naomy is part of the church choir and system operator within the spanish community. JoseCarlos is the son of SanJuana Lopez. JoseCarlos is involved with cross country and track. His goal is to run for a Division 1 and Division 2 university. He is a dual credit plumbing student currently holding his apprentice certificate. His dream is to be a master plumber. He currently works part time with a car dealer shop cleaning parking lots and maintains the landscaping. Thank you, Naomy Guisell Montes Rodriguez and JoseCarlos Hernandez for representing the senior class so well.
The Royalty Night King and Queen were voted on by the Senior Class. The Lytle 2020 Royalty Night King is Carson Aldridge and the 2020 Royalty Night Queen is Clarissa Ybarra.
The Freshman Class was represented by Marquis Lola Patino and Marquee Hector Anaya. Lola is the daughter of Desiree Carrillo and Jose Patino. Lola is involved in volleyball and marching band. Hector is the son of Melissa Anaya. Hector plays football, marches in band, plays the Barry Sax, member of the student council and recently elected as Public Relations Officer for the class of 2024. Lastly Hector is currently participating in the Lytle P-Tech Program. Thank you Lola Patino and Hector Anaya for representing the freshman class so well.
The Sophomore Class was represented by Duchess Cambri Davila and Duke Robert Wagner. Cambri is the daughter of Elizabeth Sanchez-Davila and Arturo Davila, III. Cambri is involved with the marching band, tennis, and holds an officer position for the class of 2023. Robert is the son of Reagan and Deborah Wagner. Robert is involved with Lytle 4-H, Youth Group, Cross Country and Track. Thank you Cambri Davila and Robert Wagner for representing the sophomore class so well.
The Junior Class was represented by Princess Kaitlyn Ramirez and Prince Julio Mujica. Kaitlyn is the daughter of Joseph Ramirez and Vanessa Jimenez. Kaitlyn is involved in colorguard and volleyball. She is also a student athletic trainer, cheerleader, and the class of 2022 vice-president. Julio Mujica is the son of Diana and Jose Mujica. Julio is involved in band, class of 2022 Treasurer, Student council, National Honor Society Historian, Spanish AP Program, and Trio Upward Bound. Thank you, Kaityln Ramirez and Julio Mujica for representing the junior class so well.