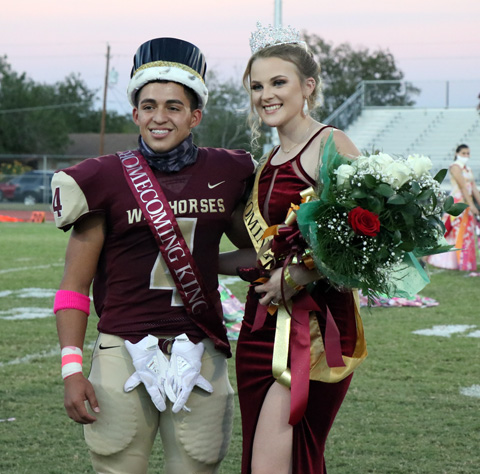 The Devine High School Homecoming 2020 festivities began with the crowning of the 2020 Homecoming Queen Allyson Taylor and King Buddy Santos.
Devine High School students voted to elect the court representatives; one girl and one boy from the 9th, 10th and 11th grades, and four girls and four boys from the senior class. They then elected one senior candidate as this year’s Homecoming Queen and Homecoming King.
Presenting the flowers to this year’s court, and crowning the new Homecoming King and Queen was the 2019-2020 Homecoming Queen Isabella Gutierrez, with the assistance of the Devine Warhorse Cheerleaders.
Senior Representative chosen Queen, Allyson Taylor is the daughter of Scott and Nikki Taylor. Ally is a member of the Arabian varsity basketball team, and is the catcher for the varsity softball team. She also plays for a select team year-round. Ally is treasurer for the Senior class, and also serves as treasurer for the Student Council. Ally is the editor-in-chief of the yearbook staff, and enjoys taking pictures at school events. She is a member of the National Honor Society. When she has free time, she enjoys spending time with her family and friends. Ally hopes to play softball at the college level, and would ultimately like to attend the University of Texas at Austin to study for her dream job as a pediatrician. Friday evening, she was escorted by her proud father, Scott Taylor.
Senior Representative chosen King, Buddy Santos, is the son of Fabian and Tonya Santos. Buddy is a member of the Varsity Warhorse football team, and is an all-state powerlifter. Buddy also participates in year-round football to stay in shape. Although he is not certain what college he would like to attend, Buddy’s ultimate goal is to earn a business degree, move to Miami and open his own real estate company. Outside of school, Buddy enjoys relaxing at home. Buddy thanks his class for nominating him as a senior class representative. Buddy was escorted by his step-mother, Tonya Santos.
Senior Class Representative Pauline Calame is the daughter of Thomas and Kathleen Calame. Pauline is involved in FFA, 4H and FCCLA, and is the front ensemble section leader for the DHS band. Pauline is the Vice President of the National Honor Society, Vice President of the Student Council, and has been President of the Class of 2021 for four years. Her hobbies include playing percussion, piano, guitar and ukulele, as well as riding horses and spending time with family and friends. Some of her honors and awards include advancing to the state level in UIL Solo & Ensemble with a percussion ensemble two years in a row, earning second place in the FFA Revaldina district talent show by playing guitar and singing, and maintaining A-Honor roll throughout her academic career. She plans to go to the University of the Incarnate Word in San Antonio to pursue a degree in Music Therapy. Pauline believes that God has given her the gift of music to help other people, and that is what she plans to do through Music Therapy. She is grateful to her classmates for nominating her for the homecoming court this year. Pauline was escorted by her father, Thomas Calame.