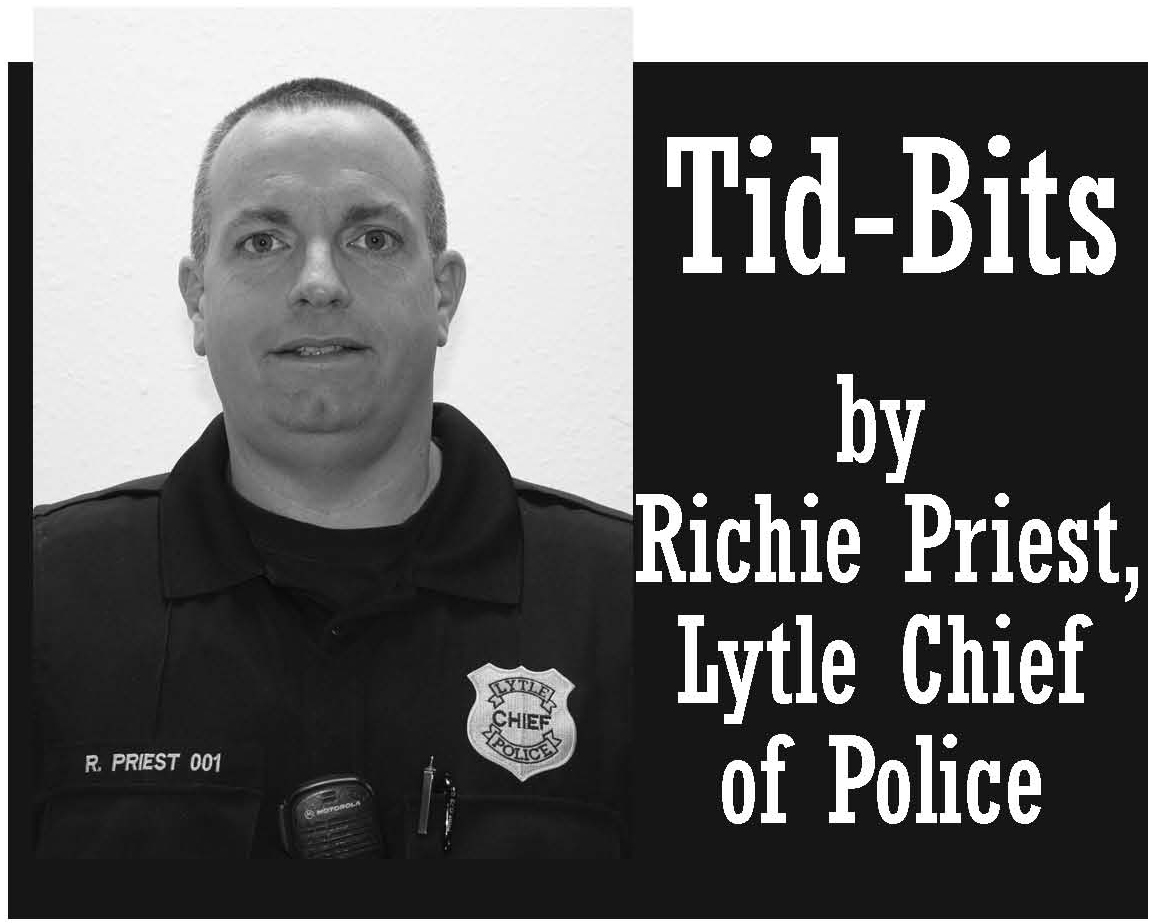 We were some busy cops this last week. Officers handled 91 service calls (maybe a record?) in comparison we had 48 calls last week. Your Lytle PD officers conducted 72 traffic stops; those stops resulted in 63 citations and 9 warnings. This report will take a while, too bad I don’t get paid by the word or the pound for that matter.
Let’s get the party started with property crimes that were reported last week: #1 – It was just a matter of time, before our first theft (by siphoning) of gas. A Main St. resident reported that when he went to bed his tank was full and when he woke up….it was empty. Sadly, I expect more of these and in many cases, the victims might not even realize it. #2 – Chaparral Ford reported that a fake check was used to purchase a 2021 Ford Bronco; the vehicle has been entered as stolen. #3 – A table saw valued at $100 was taken from the 14700 Blk. of Railroad St. #4 – Express rent to own reported that a renter pawned some items that belonged to them. #5 – Twin Liquors reported that a female took 2 bottles of liquor valued at $65. #6 – H.E.B. Plus reported a theft that occurred a couple of days earlier. #7 – A property owner reported that his security camera picked up a suspect in a farmhouse on FM 2790 N (near the Animal Control Facility). Officers responded and a suspect was arrested for burglary and booked into the Medina Co. Jail. #8 – A construction company working on the IH-35 Access Rd. reported that a water pump and power tools valued at $2,300 was taken overnight from their worksite. #9 – H.E.B. Plus detained a shoplifter and had officers issue a criminal trespass notice. #10 – A resident of the 18200 Blk. of Wisdom Rd. reported the theft of a bicycle valued at $200. #11 – A chipping hammer and a reciprocating saw were taken from the bed of a pickup. The vehicle was parked at John Lott Park, Adams St. entrance. #12 – H.E.B. Plus reported an attempted theft, the items were recovered. #13 – A customer at H.E.B. Plus reported that her wallet was stolen out of her shopping cart when she was unloading groceries.
These are the arrests we made last week: #1 – The fellow from the farmhouse burglary. #2 – A single traffic stop resulted in 4 adult males being cited and released for possession of drug paraphernalia.
Don’t forget the 4th of July Fireworks Show at John Lott Park! This is one of the city’s most well-attended events; we didn’t have a show in the last couple of years. There will be live music and food trucks starting at 5 PM. The fireworks will be set off when it gets dark. Bring a chair or maybe a blanket since there might be a sticker or two in the park.
As a reminder for our current residents and maybe it’s news for some of the new people moving into town: It is illegal to discharge fireworks in the city limits. If you have fireworks complaint, please call our 24-hour dispatcher: The Atascosa Co. Sheriff’s Office in Jourdanton @ 830-769-3434 (Option #1). They have direct radio contact with all our on-duty officers.
We have tried all kinds of ideas to enforce the fireworks ordinance. Having an officer on the water tower with binoculars (problem with access to restroom facilities). A drone outfitted with a camera (some punk shot it down with a bottle rocket). Satellite live feed imagery (officer manning it in the office intercepted a pay-for-view fight and missed the fireworks). My, what an imagination I have. This year will be a more traditional approach. We will be driving around and looking for violators, we are looking for compliance and hope not to have to issue any citations.