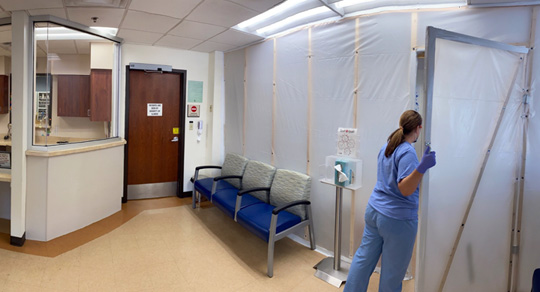 Area hospitals (major and rural) continue to be overwhelmed this week. Our local hopsital set up extra beds in waiting rooms to prepare for more patients. The community reported the loss of four more residents in the past seven days, and has many hospitalized and on ventilators.
Many locals have followed the pioneering work and at-home treatment of Dr. Richard Neel, MD, MPH at Little Alsace.
In a very brief conversation with the busy urgent care doctor, Dr. Neel, he expressed some real concern on severe symptoms he has seen more recently in Covid cases that are “harder to slow down,” especially when high-dose melatonin is not taken early enough.

“Some patients are getting a horrendous cough, and just nothing is slowing it down. I have patients who are coughing until they vomit,” Dr. Neel said. “Other folks describe terrible headaches. They describe it like someone is striking them in the head with a mallet. Over and over patients are saying the same thing. How this virus affects different people so differently is strange.”
In the San Antonio area, there are 1,466 Covid patients hospitalized as of August 23. According to City of SA data, 412 of those patients are in the Intensive Care Units. There are 279 patients on ventilators, including some Devine, Lytle, Natalia area residents as all critical cases are transported to SA if and when there is available space. According to KSAT 12, local hospitals have stated while the percentage of Covid patients hospitalized in children was only 2-3% in previous waves, Covid now accounts for as much as 10% of child hospitalizations, including those without pre-existing conditions.
In previous weeks when the virulence of the Delta variant became a hot topic, Dr. Neel expressed concern stating “Viruses are supposed to become weaker with time, not stronger.”
He is also concerned about what’s happening in Israel, which is often cited as a model for “what’s coming,” with reliable data for researchers and physicians. Israel was one of the first countries to attain widespread vaccination.
Last week, a non-profit scientific journalism source, Science Magazine, published an article titled “A grim warning from Israel: Vaccination blunts, but does not defeat Delta”.
They warned that “Israel has among the world’s highest levels of vaccination for COVID-19, with 78% of those 12 and older fully vaccinated; the vast majority with the Pfizer vaccine. Yet the country is now logging one of the world’s highest infection rates, with nearly 650 new cases daily per million people. More than half are in fully vaccinated people, underscoring the extraordinary transmissibility of the Delta variant and stoking concerns that the benefits of vaccination ebb over time.”
However, they noted that “Potential confounders include the fact that the very oldest Israelis, with the weakest immune systems, were vaccinated first.”
Currently in the US, hospitals have stated that public health officials and many doctors say boosters are urgent (see CDC briefing article), while some other scientists and researchers feel boosters aren’t the answer.
On another note, while the Pfizer and the Moderna vaccines are both MRNA vaccines, there is a more traditional vaccine expected to come out in the fall. It’s called NovaVax.
Local doctor, Richard Neel, MD, MPH recently discussed the differences he sees between the MRNA vaccines versus the new NovaVax vaccine.
“NovaVax is a more traditional vaccine, not genetically modified. You take the shot, which includes the attenuated virus like the annual flu shot, not just specific proteins, and you develop antibodies to the whole virus. I believe it is going to give us better coverage and more immunity to future variants,” Dr. Neel said.
“However, vaccinating works better when the incidence of a disease is low, as opposed to vaccinating into a pandemic, where you are more likely to see escape variants.”
Every infected person, anywhere in the world–vaccinated or unvaccinated–offers the coronavirus another opportunity to create a new variant.
Some experts call on the government to shift from mass vaccination, to dive deeper into chemoprophylactics. They call on the public health sector to dedicate more resources toward finding drugs for widespread use for early treatments of Covid-19.
“Chemoprophylactics are like TamiFlu or Xofluza, which we give at very early stages of the flu,” Dr. Neel said. “Xofuluza works really, really well for the flu.”

More on melatonin v Delta
As far as the treatment of his patients go, Dr. Neel states that “I was encouraged by how easily I got through Covid a few weeks ago, but now I’m concerned as I’m seeing more people who are having a difficult time. It’s important to stress quick/immediate/early treatment with onset of symptoms.”
He further explained that he believes melatonin is still helping prevent severe infection, though it is also discouraging to see that horrendous cough and headache still persisting. Neel emphasizes that it is easier to treat with melatonin at the onset of illness, than it is once symptoms are advanced.
“The key still seems to be early treatment to avoid getting to that point. Good vitamin D levels before getting the virus is still really important,” Dr. Neel said. “Taking some melatonin nightly as a preventative is important. Taking increased melatonin at the first sign of infection is also really important. I like to try to individualize it for everyone, but 1 mg/kg/day in divided doses is still a good starting dose at onset of symptoms (excluding pregnant women where it’s used only very judiciously).”
Neel also reminds patients to try another brand if one brand is not working.
“I worry about the quality of melatonin some people are using. Some patients seem to be needing higher doses,” Neel said. “We still have a lot to learn about this virus.”