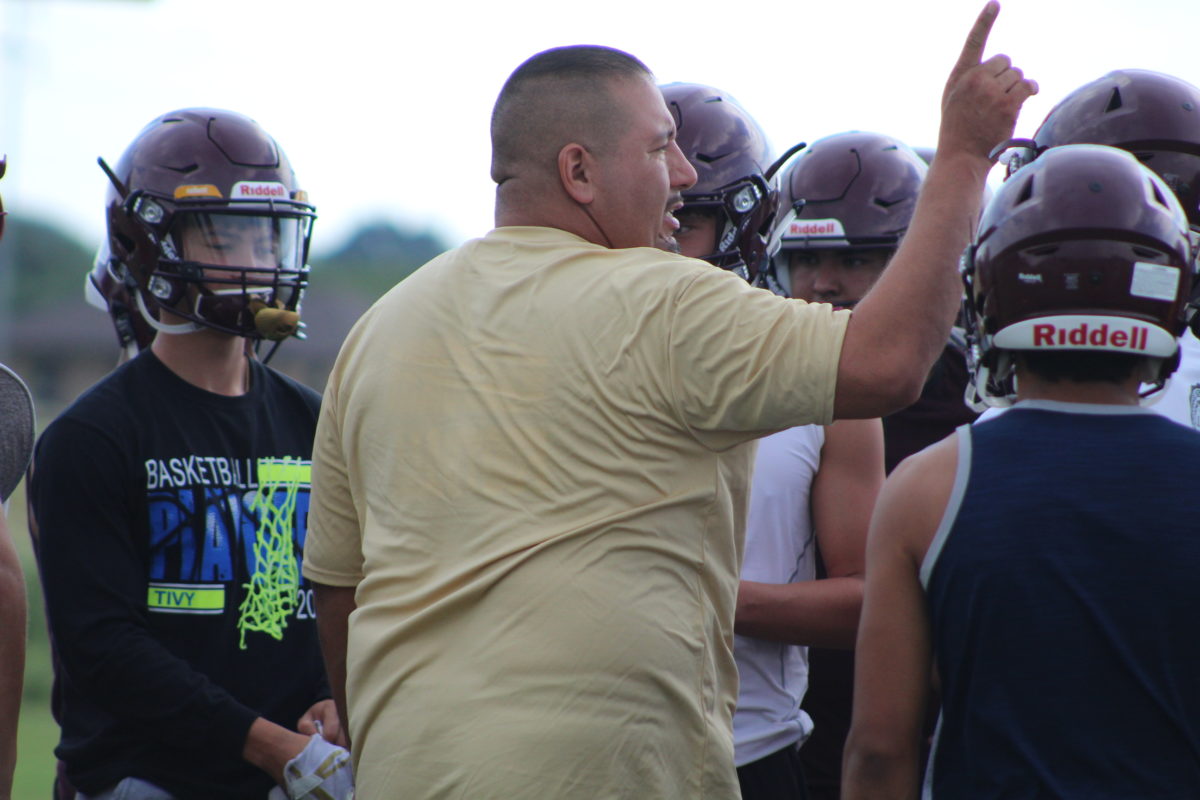 On the first Monday of August, the Devine Warhorses were scheduled to be on the practice field at 7:30 am to begin preparations for a season in which they are seeking the school’s fourth straight football district championship. Instead, the field looked more as if it was ready for a water polo match instead of a football practice. Thunderstorms forced the Warhorses to move their workout indoors to avoid lightning and the water-soaked field.
It was the first time in well over 23 years that any part of two-a-days was forced inside due to stormy weather. According to Head Coach Paul Gomez, the rain was a non-issue concerning the preparation and persistence demonstrated by the incoming Warhorses on that first day. “The kids, as well as the coaches, were disappointed that we didn’t get to go onto the practice field,” said Gomez. “They didn’t let that disappointment show in their work ethic, however. The players were very attentive to the coaches and remained focused throughout the day.”
The first four days in which players are dressed in t-shirt, shorts, and a helmet are necessary for teaching new ideas, altering schemes, and re-acquainting players with terminology, formations, and plays that many began familiarizing themselves with since their 7th grade Colt season. According to Gomez, “We had a great opportunity to divide up the groups for individual work and repetitions, and then bring everyone together toward the end to see the overall picture of what we are trying to accomplish. The ‘chalk-talk’ with the players was just as valuable as a learning experience as it would have been teaching it on the field.”
The focus the players demonstrated on the first day led into an even more concentrated second day when the players got onto the field for the second day of practice. “Seeing how the players responded to all of the teaching they received Monday and being able to translate those concepts to the practice field was very encouraging,” said Gomez.
10 Year Anniversary
The indoor practice facility has gotten its fair share of use from the football team over the years, but not until this past Monday was it used for an actual first day of practice. DISD’s decision to construct the building in 2007 has been a huge benefit to all school sports; not just football. Baseball, softball, tennis, track, cross country, and cheerleading squads have used the facility countless times when Mother Nature has intervened with uncooperative weather conditions.
Safety First
Coach Gomez was undoubtedly looking forward to stepping onto Dean Bates Practice Field to get his opening practice underway. Wanting to get onto the field under dangerous circumstances never crossed his mind however.
“Keeping the players in a safe environment turned out to be my number one priority to begin the day,” said Gomez. “I wasn’t going to put any player, or anyone for that matter, at risk just for the sake of saying that we went outside because that was what was scheduled to happen.”
Lightning and a flooded field were not the only concerns for the day. Coach Gomez along with DISD administrators remained busy throughout the morning and early afternoon in communication with the sheriff’s department making sure conditions of the roads were safe before allowing players to leave. Information was communicated via phone calls, texts, or social media regarding the dismissal of players due to the potentially dangerous weather situation. Kudos to all involved for putting the well-being of individuals and families ahead of the desire to get onto the practice field.
It’s Not Too Late
More than 90 players attended the first day of workouts for the Warhorses. Those that did not report for the first few days of practice but want to be a part of something special, that want the chance to make lifelong memories and friendships are encouraged to contact Coach Gomez to join up as soon as possible. Each practice is vital to the development of not only the player, but also key to a team coming together to strive for a common goal—District Championship #4 in a row.
By Jerel Beaty
Staff Writer