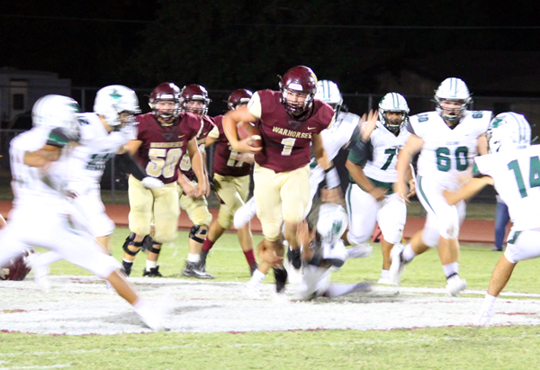 One of the biggest rivalries in Texas takes place at Barry Field in Hondo Friday night. The Devine Warhorses take on the Hondo Owls in a pivotal match against two times in contention for the District 15-4A DII title.
Devine is trying to bounce back from their district-opening 33-26 heartbreaking loss at Carrizo Springs while Hondo enters the contest fresh off a 56-13 mauling of the Mavericks in Pearsall.
This game has heavy district championship aspirations for both teams, but especially for the Warhorses as they more than likely cannot begin district 0-2 and keep championship hopes alive.
Hondo on the other hand, is ready to show they are true contenders for the title. This ballgame could show that they are a true threat to Devine, Bandera, and Carrizo Springs. The Owls battle Bandera in their next to last district game on October 29 while they take on Carrizo November 5.
Hondo quarterback Kaden English has completed 43 of 91 attempts (47%) for 611 yards and 3 touchdowns. English has also been intercepted three times.
Owl receivers Carson Winchester and Jacob Bailey each have 12 receptions to their credit. Winchester has 193 yards while Bailey has 130 yards and one touchdown.
Their big-play receiver has been Martavious Patterson, however. He has less receptions than the previous two at seven but has 153 yards which is good for 22-yards per catch.
Winchester, English, and Carlos Arcos tote the ball primarily for the Owls. Winchesters has 57 carries for 514 yards for a 9.02 yard per carry average. He also has 7 rushing touchdowns.
English has 58 carries for 214 yards, but has reached the end zone 9 times. Arcos has 24 attempts, 102 yards, and one touchdown.
Even though Hondo enters this game with a 2-3 overall record, several players were missing the first part of the season. The Owls seem to be relatively healthy now and have their eyes on the District Championship.

Gomez’s take
One person not allowed to look too far ahead is Devine Head Coach Paul Gomez. The sting of the Carrizo loss is surely still firmly embedded in his head, Gomez must prepare his team for another big game in Hondo while at the same time not concerning himself, or his players, with what may be happening with the Wildcats.
“Hondo is a good football team and we know that they will bring their A-game Friday to this rivalry. We will get their best effort that’s for sure. Hondo is a well coached ball club; Coach Cary and his staff do a great job over there. Offensively, they are led by junior running back Carson Winchester (#20). He is their big play threat. He’s a great running back that can catch the ball out of the backfield. They line him up all over the field and find different ways to get him the ball. But he is definitely not their only weapon. Senior QB Caden English (#10) does a really good job running the ball and is also a very good passer. Wade Kaden (#82) and Martavious Patterson (#80) are big, quick targets at receiver. Greg Guerra (#44) who plays TE and fullback along with Brandon Andreas (#40) at fullback are big bodies that can run as well. They use their fullbacks in the passing game and in their screen game so we will have to have eyes on them all the time. They are successful because of an all-senior offensive line that is big and agile. Guerra and Andreas are also seniors who are also very capable blockers. Defensively, they have played better as each game is played with their last two being their best. They utilize multiple defenses. The first few games they based out of a ‘50’ but in the last couple of games they have mixed a split defense with their 50 front and they have had better success. We are expecting to see both 50 and split looks against us. Their two defensive tackles are very big and strong and their defensive ends are good-sized athletes. Their linebacker’s can run. They have a good, disciplined secondary led by Winchester.”
Nothing cures a bad-loss-hangover better than following it up with a victory. A victory against rival Hondo would definitely be frosting on the cake, and help eliminate any remaining sour taste residue from the Carrizo Springs loss.
“We are ready to get back to work and take this nasty taste out of our mouths. We have to go take this win because they are not just going to give it to us. It’s in Hondo and we will have another playoff atmosphere. These games are exciting to be a part of and we need to bring our own A-game for four quarters. We are going to leave it all on that field and live with that. I’m excited to watch how we respond this week.”
By Jerel Beaty
Staff Writer