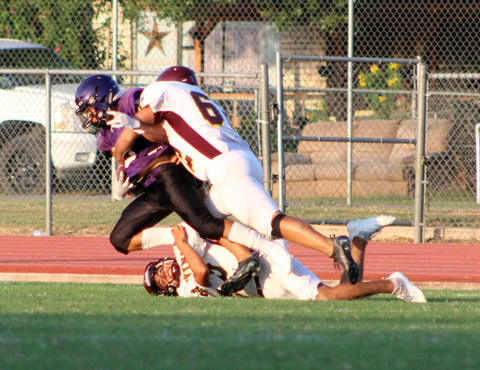 Devine concluded it’s second of two scrimmages against Navarro last Thursday at Warhorse Stadium. After taking on Central Catholic who was San Antonio Express-News preseason #9 team in Sub-6A, the Warhorses tackled the Panthers who were ranked #8 in the same poll.
Some “experts” have picked Navarro to be the advancing team out of Region IV-4A. The schedule does not get easier for a while as the Horses now prep for their season opener against San Antonio Highlands, who is SA Express-News #7 team.
Gomez’s take
Devine Head Coach Paul Gomez evaluated his troop’s performance saying, “Well, the Navarro scrimmage didn’t end up like we wanted it to. Not having played them in two years (due to Covid) and us having several young players in important positions proved significant. Our sophomores and freshmen on varsity have never seen that offense come at them. The seniors were sophomores and the juniors were freshman so neither really faced Navarro at the varsity level.”
Navarro had few to no injuries going into the scrimmage, while Devine had at least six not padded up. The Central Catholic scrimmage helped the less experienced players with a very different running and passing scheme as compared to what Navarro presents to their oppositions.
“It’s a different speed and intensity that you have to prepare for physically and mentally,” Gomez continued. “Even though we are not happy with the overall outcome, it was a great learning experience for our young team. Going through that adversity and understanding that if we can fix a few things technique wise that the outcome could have been much different. Scrimmaging Central, who is picked to make a run in TAPPS 5A and Navarro, who is picked to come out as our region’s champion by Dave Campbell’s, can only make us better.”
Ready, ready, ready to run
Running backs coach Evan Eads was pleased with what he saw from his somewhat young core of backs, but knows there is more work to be accomplished as the season enters week one.
“I feel like the scrimmage was a success for what the running backs worked on this week,” Eads stated. “We wanted to line up correctly and go to the correct places. Now we will get better at executing the offense.”
Gus Puente, Hayden DuBose, Ethan Santos, Gabe Esquibel, Nate Ramirez, Marcus Rodriguez, and Aiden Zapata all had valuable reps they continue to learn wrinkles in a new offense. Xavier Contreras, who is slated to get reps from the backfield as well, was injured and did not play. He is expected back soon.
“We will not add anything new this week. Our focus for week one is perfect execution of all runs, blocks, and routes. Ethan, Hayden, and Gabe got the early offense and even though no major mistakes that cannot be corrected were evident from film, I would love to see this group be more confident and aggressive,” Eads said about his potential number one group for the season.
“Nate, Marcus, and Aiden are the next batch of running backs,” according to Eads. “Nate had a good catch for a first down and once he has more reps he will find the holes and cuts better. Aiden ran some good routes. Aiden needs to trust his speed when he hits the hole. Gus had the most improvement at blocking and is more than capable of carrying the ball when called upon.”
It is back to the grindstone for Eads and his troops as he concluded, “These guys will put in the work needed to make major improvements so we will have a chance at a win against Highlands.”
Tight fit
Tight end coach Bart Oropeza and his tight end position players are learning a new system, as are the rest of the Warhorse offensive players.
“After Thursday’s scrimmage against Navarro I felt that my Varsity tight ends need to work on technique more than anything,” said Oropeza. “We just need to trust our techniques and we have to get the job done. Our blocking is vital to the success of our running game.”
Oropeza is pleased with how his players have adapted to the new scheme overall and appreciates the intensity in which they perform saying, “I will never question these guys work ethic and I know with even more hard work and determination that we will execute and do our job this coming Friday. I am confident in my players, and that will not waver.”
Wise man say
Full-time Warhorse receiver and defensive end coach and part-time philosopher Scott Taylor in response to the challenge presented to his players by the opposing Panther players said, “Sometimes in life you have to respond to getting hit in the gut by something that is bigger and better than you.”
“Overall, Navarro had bigger and more skilled players this past week, but if we are lucky enough to meet them down the road in the playoffs, I have every bit of faith that my players will respond positively to that challenge. They were better than we were last Thursday, but we have a high ceiling for improvement and I believe the players accepted my challenge during film to rise to the next level. We will see how much better they want to become as the real games begin and they have all come back to work with the right attitude to learn and practice,” Taylor said in closing.
By Jerel Beaty
Staff Writer