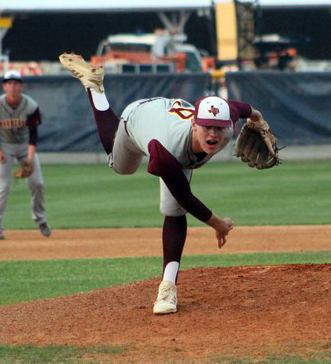 The Warhorses made an early exit from the playoffs thanks to the Navarro Panthers and the threat of inclement weather that forced a change in the schedule of the three-game Bi-District series.
Instead of hosting the Panthers for the first game last Thursday night, Devine met Navarro, the third-place team out of District 30-4A, in Victoria for a neutral-site doubleheader. The Warhorses lost both contests in dramatic fashion, getting no-hit in a 6-0 loss in Game 1, and falling 5-3 in Game 2 thanks to a walk-off home run.
Game 1
Navarro (20-10) seized control from the outset, scoring four runs in the top of the 1st inning. The first three Panther batters reached base on a single and consecutive walks before two runs scored on another a single. A two-out dinger over the left field fence cleared the bases and gave Navarro a 4-0 lead.
Devine’s first base runner came in the bottom of the 3rd inning when Gehrig Runyan drew a walk. After back-to-back strikeouts, the inning ended on a fielder’s choice grounder to 2nd.
The Panthers scored again in the top of the 4th inning. After a leadoff single and steal, a two-base error allowed the Navarro base runner to score and increase the Panthers’ lead to 5-0.
Newt Crouch reached base in the bottom of the 4th inning thanks to a two-out error, but a grounder to the pitcher snuffed out the inning.
The Warhorses got a runner in scoring position in the bottom of the 5th inning. Runyan and Chad Lawson drew consecutive one-out walks, and Runyan advanced to 3rd on Blaine Miller’s grounder to 2nd. A strikeout left Runyan stranded 90 feet from home.
Navarro’s last run of the game came in the top of the 6th inning. A solo shot to left field on the second pitch of the inning put the Panthers up 6-0.
Devine’s biggest scoring opportunity came in the bottom of the 6th inning. Dalton Kramer and Crouch worked back-to-back one-out walks, and after a strikeout, both moved up a base on a passed ball. A grounder to shortstop in the next at-bat ended the chance of a two-out rally.
Lawson drew a one-out walk in the bottom of the 7th inning before the game ended on consecutive pop-outs to shortstop.
The Warhorses drew six walks but went hitless and left seven runners on base. They also committed two errors.
Truett Barron gave up six runs, five of them earned, on seven hits and four walks and recorded three strikeouts in six innings of work. Robert Ramirez kept a clean sheet in one inning of relief.
At bat: Kramer 0-2, 1 BB; Crouch 0-2, 1 BB; Runyan 2 BB; Lawson 0-1, 2 BB.

Game 2
After a 30-minute break, the teams returned to the field for the second game of the series, and the Warhorses put up a fight facing elimination.
Navarro tallied the contest’s first run in the bottom of the 2nd inning. A passed ball sandwiched between two singles put runners on the corners with no outs, and though the next batter grounded into a 6-4-3 double play, the runner at 3rd scored to give the Panthers a 1-0 lead.
The Warhorses scored their first runs of the series in the top of the 3rd inning to take the lead. Lawson drew a walk to start things off and advanced to 2nd on Miller’s sacrifice bunt. Isaiah Oropeza’s grounded to 3rd resulted in an error that allowed Lawson to score and left Oropeza at 3rd base. Kramer drove in Oropeza with a two-out single to center field to give Devine the 2-1 lead.
That advantage was short-lived, as the Panthers scored twice in the bottom of the 3rd inning. A walk and a sac bunt put a Navarro runner in scoring position at 2nd base, and a double tied things up. A single two batters later plated another run to put the Panthers up 3-2.
Devine responded immediately. Brady Harrell lined a double to center, and scored on Lawson’s two-out single to left to tie the game 3-3.
The game remained tied until the bottom of the 7th inning, when Navarro quickly put it away. A leadoff double put the winning run in scoring position, and the Panthers won the game and the series with a walk-off homer over the right field wall.
The Warhorses had four hits and two walks but left five runners on base.
Runyan gave up three runs, including two earned, on four hits and five walks, and had three strikeouts in 3.1 innings. Harrell allowed one hit and one walk in two-thirds of an inning. Kramer allowed two earned runs on two hits and a walk and struck out three in two innings of work.
At bat: Oropeza 1-4; Kramer 2-2, 1 BB, 1 RBI; Harrell 1-3; Miller 1-2; Lawson 1-2, 1 BB, 1 RBI.
Devine ended the season with a 17-9 record, and went 6-2 in District 29-4A play to finish as runners-up.
By Marly Davis
Staff Writer