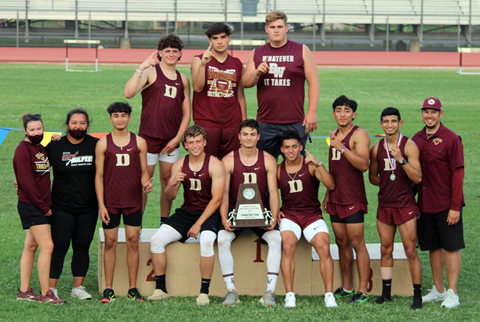 Fifteen Devine Warhorses qualified for this weekend’s regional track meet in Kingsville in route to winning the team championship over runner-up Hondo. Jacob Featherly set the school record at 14’4” in Pole Vault.
“The kids showed up with the attitude that they were going to come out of the meet as the Area Champs, and they did just that,” said Head Coach Lon Cozby. “Even though we didn’t get just a whole lot of first place finishes, we kept plugging along to get points in the events we were expecting to get points and I’m proud of the way we competed throughout the day.”
Fifteen of the twenty Warhorses that competed at area move on to Regional this Friday and Saturday.
“Having a big group qualify for Regional is really satisfying and lets me know that our program is in a great place. These guys have worked their tails off during this crazy year and are reaping the benefits of that dedication,” Cozby commented.
Putting a little twist on how individual accomplishments lead to greater team goals and achievements, Cozby concluded saying “Even though track is supposedly an individual sport, the last I checked the Warhorses won the Area TEAM Championship!”
Feather in his cap
Senior Jacob Featherly etched his name in the Warhorse track record books by setting the school record with his 14’4” pole vault performance.
Jacob made things interesting on his way to the record by almost not clearing his opening height of 13’0”. Jacob cleared 13’ on his third attempt to remain in competition or that school record would not have wound up his to own.
“Featherly is showman over at the pole vault,” said a smiling Cozby. “It was a great atmosphere as a few classes from the elementary were able to walk over and witness history. However, not without a little adversity. He decided to make it interesting by missing his opening height on his first two attempts. When he cleared in on his third attempt the kids screamed and you could see him let out a sigh of relief. After clearing a few more heights and winning, he decided to go for the record. When he cleared 14’4 those little kids were jumping around and yelling…it was a great scene. All of his friends were cheering, I am pretty sure I saw some tears from a few proud adults.”
Now in second place in Devine Pole Vault lore is Paul Jett who held the record at 14’3” since 1973, some 48 years ago.