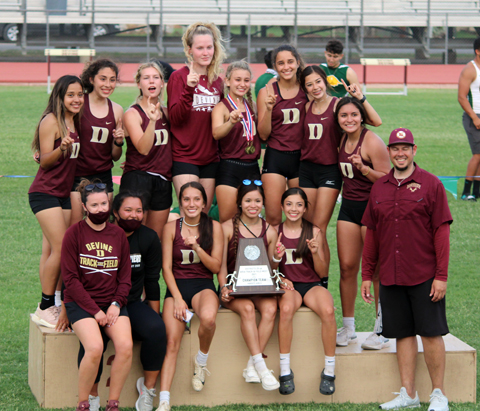 What a day for the Arabian track program! Not only did they capture the overall team championship, but also broke two school relay records in the process. Devine topped second place Pearsall by 49 points while Kristina Moralez, Neenah Guerrero, Avery Cruz, and Aaliyah Terrazas set school records in both the 4x100m and 4x200m relays.
“When you go into the morning of area as a coach you get a little nervous,” said a more-relaxed, post-meet Coach Lon Cozby. “I guess as a Devine track athlete you just show up and set personal bests.”
Nineteen Arabians competed at the meet, which says a lot about their effort at District just a couple of weeks ago, while 15 continue their quest to compete at State.
According to Cozby, this whole track season has been about the process of improvement and for each to lay it all on the line when it matters most.
The Arabians did just that.
Throughout the year, Cozby has repeatedly emphasized to the kids that he wants them to be their best at area and regionals. Obviously, that message was heard loud and clear.
“Sometimes you say things hoping they will listen and sometimes they go out and exceed all expectations,” said Cozby. “In every event each athlete either set a PR or was a few inches or milliseconds off.”
Twelve Arabians won gold medals in their respective events, with several setting their all-time personal best in the process.
Individual accomplishments lead to the achievement of greater team goals.
Cozby wrapped up his recap of the day’s events by saying, “Even though track is supposedly an individual sport, the last I checked the Arabians won the Area TEAM Championship!”
Out with the old…
Out with the old, in with the new as far as the two new school records are concerned.
Former Arabians now holding the second-fastest 4x100m time is the 2019 squad consisting of Alissa Stehle, Chasity Reyes, Dana Aaron, and Aaliyah Terrazas who ran a 50.79. Terrazas actually remains as she is a member of this year’s record setting team.
The former 4x200m record holders were Macie York, Dana Aaron, Caroline Anderson, and Andrea Gomez. That group posted a 1:47.45 in 2016.
“We knew the girls were going to run a fast time, but TWO school records! C’mon that just doesn’t happen,” Cozby said about the Moralez-Guerrero-Cruz-Terrazas foursome. “Those girls are just crazy fast and super competitive. We had a bad handoff on the 4x100m and the girls were upset they finished second place…until they heard their time. Immediately after they told me, “Cozby, we got this, we’ll show you in the 4×2!”
The girls followed through on their threat in a big way.
“I didn’t know they were going to run four-seconds faster and win by 80 meters, along with setting another record!” said an astonished Cozby.
Golden moments
Several Arabians placed first overall in their respective events, with some taking gold medals in multiple events.
Senior Brianna Bowyer coming off her own school-record performance in Pole Vault won gold in all three of her events taking Pole Vault (9’0”), 800m Run (2:29.32), and 1600m Run (5:53). Bri’s 30 points led the Arabian team.