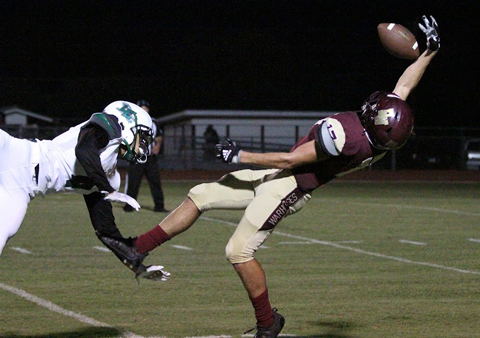 Devine closed out the first half of its season last Friday defeating the visiting Luling Eagles 19-0. In the shutout, the Warhorse defense limited Luling to 142 yards total offense and only nine first downs.
The Horses are now 4-1 on the season and look forward to their off week to fine tune phases of their game and to heal some nagging injuries.
“Any time you get a ‘W’, you have to make sure that you enjoy it,” Head Coach Paul Gomez said about his team’s most recent victory. “Did we execute like we wanted to on offense? Not really. Did we tackle better? Maybe a little bit, but we still missed too many tackles. Going into the game we knew Luling had size and some play makers. They had the ability to make it difficult for us if we didn’t execute our scheme and they did.”
For a 3A school, Luling had size and athleticism of that of a bigger 4A to smaller 5A program. They lacked the number of players to effectively rotate fresh players in and out, however, and as the game wore on, the Horses were the tougher and more physical team.
“Offensively, we missed too many blocks and too many scoring opportunities,” Gomez said of the relatively low-scoring output compared to what Warhorse Nation has seen so far this season. “If we execute to the best of our ability, we could have easily at least doubled our 19-point total if not more.”
As good as Devine’s defense was a three-point field goal would have been enough to win this homecoming tilt.
Gomez elaborated, “The 19 points was enough and our defense stopped them when they had to so those are definitely positives for us moving forward.”
Warhorse running back Gabriel Esquibel scored on a 4-yard run on Devine’s second possession of the game with barely five-minutes off the clock. Caden Hanson booted the extra point to give the Horses a 7-0 lead.
On the first play of the second half, Devine quarterback threw a deep ball up the right side of the field to tight end Mason Martinez. Martinez’s catch will go down as one of the best in recent memory.
“Mason had an amazing 31-yard reception; one of the best one handed catches that I’ve seen,” stated Gomez about the acrobatic grab.
Martinez’s catch lit up the Warhorse side of the stands and gave the team a much needed boost as Esquibel scored his second touchdown of the game on the next snap from 7-yards out. Devine had to go for two as place kicker Hanson was injured during his previous point after attempt. The conversion failed, but the Horses took a 13-0 lead into the halftime locker room.
Running back Xavier Contreras scored the game’s final touchdown on a 9-yard run midway through the third quarter, boosting Devine’s lead to the 19-0 final.
The Horses rushed for 245 yards and three touchdowns on the night overall.
“Our running backs ran hard. I think Gabe had a solid game for us offensively. Brady gave us some tough yards running the ball,” Gomez stated about his backfield production.

Defensive prowess
The story of the night was probably the defense, however, as Devine pitched its first shutout of the season and allowed only 142 yards from scrimmage. Teams successfully threw the ball against the Warhorse secondary through the first four games, but Luling completed 4 of 9 attempts for only 29 yards.
A big reason the passing numbers are not bigger is due to the fact that Devine’s defensive front and linebackers pressured the Eagle quarterback out of the pocket and into running situations on several occasions.
“Defensively, overall it was a good game. Anytime that you hold a team scoreless is definitely a good accomplishment. We still had too many missed tackles but we were really good for 85% of the time. Just have to clean up the other 15% and this defense can do some great things. We are definitely playing harder, we just have to keep on working tackling in space,” Gomez said, recapping the great defensive effort.
With a week to fine-tune, recover, and maintain conditioning, the Horses prep for a much improved and highly skilled Carrizo Springs team.
“We will keep drilling our tackling in space and remain focused on improving on fundamentals of the game. I know some may think that we are asking too much, but we wouldn’t think this way if we didn’t believe that this defense could be very very good. We are proud of our boys but we will not let them down by accepting just being good enough. We are going to expect them to be great because that can be their potential. They need to understand that the growth of a player comes from the obstacles that are put in front of him. It’s a blessing to be 4-1 but now is the time to be the best that we’ve been. It’s district and that Gold Ball is every team’s goal. We are going to work on fundamentals this week and make sure every player understands technique and scheme as we work toward a district championship,” Gomez said in closing.
Unbelievable catch
Senior Mason Martinez captured a highlight reel moment on the first play of the second quarter. Facing a 2nd and 4 yards to go from the Eagle 37-yard line, Martinez completed an amazing catch in front of the Warhorses biggest crowd of the season.
Martinez was at right tight end to begin the play and quarterback Brady Hackebeil took the snap from center and faked counter handoffs in the backfield before booting out to the right hash, 44-yard line.
Martinez was completing a 15-yard post pattern to the right side of the field as Hackebeil launched the ball in Martinez’s direction. Martinez, who had gotten behind an Eagle defensive back, stretched his right hand as high as he possibly could in jumping up to try to contact the ball with a single, gloved hand.
The ball hit Martinez’s hand and after very briefly losing contact with the ball, Martinez was able to regain control as he secured the ball with both hands and brought it into his chest as he fell backwards to the seven-yard line.
The homecoming crowd erupted and Mason Martinez now has one of the most memorable catches in recent Warhorse history.
Up next
District 15-4A DII kicks off October 8. The Horses travel to Carrizo Springs to battle the 5-0 Wildcats; kickoff is set for 7:30pm.
Other district action has Bandera at Crystal City and Hondo at Pearsall.
By Jerel Beaty
Staff Writer