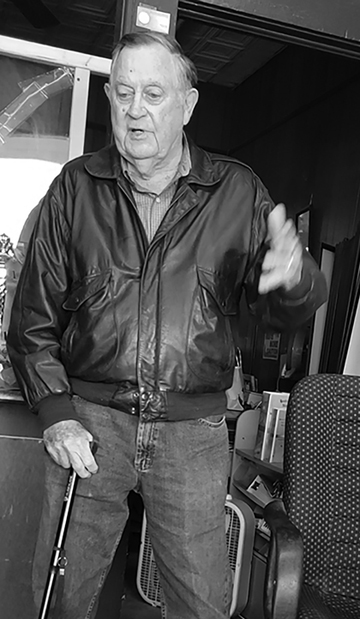 During the annual Christmas light awards for HANK, Mr. John Southwell of Hondo, now 88 years-old, spoke about how it all got started. This organization is truly so unique, and so sincerely good, and we are excited to announce that their story will soon be featured in Chicken Soup for the Soul: Kindness Edition in March 2022.
And this man, who stands for so much, recently spoke to locals about where HANK stands now in their mission to create more safe, warm beds in the form of local foster homes.
“One day my wife Debbie said, ‘We’re going to be CASA volunteers,’ and I said ‘Okay,’” he said with a smile, explaining the way HANK Inc.(Helping Abused and Neglected Kids in Medina County and surrounding areas) got its beginnings.“So by working with abused children in state care, as CASA volunteers, we found out that there were so many things that these kids need, that the State doesn’t provide.”
“In 2002, I got with some case workers and I said ‘What do ya’ll do for the kids at Christmas?’ and they said ‘Nothing,’ and I said ‘Well we’re going to do something for them,’” Southwell said with an even bigger smile.
Ever since then they have provided the Christmas wishes of anywhere from 100-200 kids in the state’s foster care system from Medina County and surrounding counties.
“Now we work local case workers from child protective services on a weekly basis, to provide everything that these kids need that these families (taking them in) don’t have. We serve a five-county area (starting right here at home—Medina County). We provide the case workers with a form, and then we meet them down at the store to buy what they need…beds, strollers, that sort of thing,” Southwell said.
While the state does provide for children sent off to shelters in metro areas and an allotment of funds to licensed foster facilities, the state will not provide assistance to a relative who is willing to take the children in. That’s where HANK steps in.
Sometimes, Grandma takes in six young children, and that provides kiddos with a loving home here locally rather than having to be sent off to a large nameless shelter in Houston or Austin or farther, with foster beds being so hard to find in our area.
“And grandma doesn’t have any beds. She doesn’t have any car seats. She doesn’t have a playpen, strollers, or any of this kind of stuff, when the State doesn’t provide that,” Southwell said.
Community Foster Homes
And then there’s HANK’s Community Foster Homes, their most ambitious and touching project.
“We found out that there were not any foster facilities in our area,” Southwell said. “So our goal was to put in six community foster homes (in Medina County). That was our goal. We’ve got three homes now…..I don’t think I’m going to make it to six. I’m 88 now,” Mr. Southwell says with a smile, “But my wife, she’s younger, and she is taking over.”
The maximum number of children you can have in a community foster home is six, so foster homes in our region are still quite scarce. In fact, officials stated there have been a few instances of “CWOPs” (a Child without placement) here locally. This is a common issue officials are seeing all over the state in recent months. When the state has a child without placement (or CWOP), they often have to stay with caseworkers in a hotel or office until an open bed in a foster facility can be located.

So the need for community foster homes is as important as ever. Mr. Southwell explained a little more about how their community homes operate.
“We are very close to the kids in our homes. We do not manage the home, we provide the home, and the state has their licensed agents who manage it,” Southwell explains.
As kids in our local homes turn 18, HANK helps combat yet another short-fall of foster care. Under State law, children are released from care on their 18th birthday. Even children still in their senior year of high school are released on their own. The statistics of those who fall into crime is sickening, but in the words of Mr. John Southwell, 88 years-old mind you……“That’s not going to happen to HANK kids!”
Mr. Southwell had just returned home from the hospital after a battle with Covid, and he was already back to helping more kids, as he explained that some of their children were “aging out”.
“I had a little girl in our Devine home that turned 18, and aged out, and she got kicked out. Well I know from research that I’ve done, what happens,” Mr. Southwell said. “I knew this little girl of course, so I asked her what she wanted to do. Well, she wanted to be a beautician. So I said we will send her to beauty school, and a year later she got her beautician license, and she’s in San Antonio right now, doing real well. I will never let a kid age out and just get booted out, not from our HANK homes. I cannot do that. I won’t.”
“My wife and I have a policy that when they age out, they don’t get kicked out. I also have a young man here, in high school. So I asked him what he wanted to do, and he said he wants to be a mechanic. So I told him, well, when you graduate, we’ll take care of getting you educated for mechanics,” Mr. Southwell said. “I love children. I have three, and I really can’t understand people that would abuse a child. It’s hard to understand.”
“The most beautiful thing is that, from the very beginning, the Lord has provided the money,” Southwell said.
He spoke about some of the moments which can still bring a tear to his eye, like when the Greehey Foundation provided the funds for HANK’s first community foster home in Devine.
“The newspaper ran an article about HANK, and I don’t know if you know Margaret Greehey? Well this lady called me after they had written this article, and she said ‘I want to talk to you about your foster home project.’ I didn’t know her, but I met with her, and told her all about it and when I finally got through talking, I asked ‘Have I answered all your questions?’ and she said ‘Yes.’ So I said ‘So what’s the purpose of this?’ and she said ‘Well, my family has a foundation, and I’m going to ask them to help you put in these homes.’ I said you’ve got to be joking. Sure enough, Bill Greehey, the CEO of Valero, called me and we met and talked and the Greehey Foundation gave me a check for $125,000 to put in the foster home here in Devine. And just one thing like that after another has happened all the time. We’ve always had enough money.”
He is also proud to note, “This is a non-profit. Nobody receives compensation. We office out of our home, and we have volunteers, but nobody gets paid. Everything goes to the kids,” Mr. Southwell said.
Discussing how someone had brought to his attention how some charitable organizations have high expenses that take away from the charity at hand, he emphasized that HANK volunteers NEVER take compensation. “Our motivation is to help the kids, it’s not to help ourselves, and I think that is why HANK has been so successful,” Southwell adds.
By Kayleen Holder
Editor