Rather uneventful couple weeks since I enjoyed our Griswalds Thanksgiving….now we just been repairing stuff…where’s the Tylenol.

Not a lot of things happening at Commissioners Court other than a lotta platting and subdivision stuff. Pct 4 has one going in out off of CR 7711 that is considered phase 2 of an existing subdivision. Others are being considered and preliminarily approved in the same area. Having an issue with the subdividers adhering to the rules.

The Courthouse Annex is moving along nicely. We are at the point where we approved the purchase of furniture for the District Attorney and the Health Unit and metal detectors for the jail and Courthouse Annex. Won’t be long now….

When the Appraisal District gets 3/4 of the taxing entities that it serves to agree to the purchase (we approved it this morning) of the old District Attorneys office, they can move out of the Tax Assessor Collectors office and leave Melissa Lutz with a whole lotta extra space.

There was also a whole lotta resignations from and appointments to various ESD boards around the County.

We were sposed to recognize Melissa Lutz for her Continuing Education for this year but, she was a no show. Her daughters Christmas event at school took precedence over us. That’s ok, we’d recognize her anywhere.

Went to the City Council meeting last week and TxDOT was there giving a presentation on the ins and outs of sidewalks. I did not catch it all but, it seems that there is a grant program available in which cities with a population of less than 5,000 can apply. I certainly hope that the City pursues this because the area on the north side of SH 173 across from the High School and back towards town sure do need a safe place for students, and other pedestrians, to walk. I offered any assistance that the City and TxDOT would allow me to contribute. 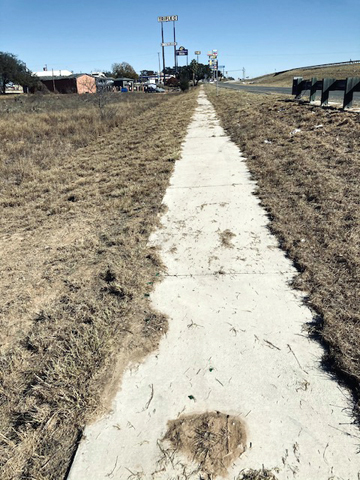 Speaking of sidewalks and TxDOT, go out to SH 173 and get on the southbound access road/entrance ramp to IH 35 and look to the right side of the road. There is 2,554 feet of 4 foot wide sidewalks to nowhere along the roadway. Some portions are exposed and some grown over with weeds. I walked along it and measured it and I believe that I was the first person to use it since it was constructed several years ago.

If you take the exit to Lytle from IH 35 South approaching the HEB, you will come across another lengthy stretch of sidewalks to nowhere between the roadway and the fence. I did not measure this stretch, but it is lengthy.

Using figures from a couple of years ago when I had sidewalks built at my house, this stretch of concrete walkways by Triple C cost approximately $61,296.

This sidewalk to nowhere could have been constructed in between our handicap ramps to nowhere along SH 173 and turned into a safe pathway to somewhere capable of being used by wheelchair bound pedestrians and students. Would have been nice for the City to have a little input in this project and maybe suggested a better location for sidewalks.

Probly the last entry for this screwed up, dumpster fire of a year so…Merry CHRISTmas.