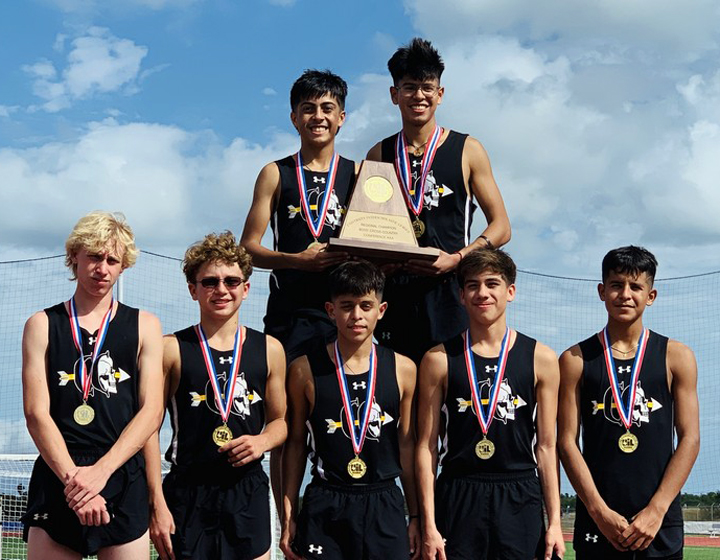 Congratulations to the Varsity boys for being Regional champs for only the 2nd time in our history and defeating the #4 team in the State and stopping their 9 year reign over the region! Lady Pirate Eisabel Guerrero placed 15th and also qualified for the state meet.
Lytle Pirate individual results are as follows:
Carlos Tamayo 5th 17:21 (Individual medalist-State Qualifier)
Gregorio Alcorta 11th 17:42 (All Region)
Jose Carlos Hernandez 12th 17:52 (All Region)
Jose Cortez 18th 18:06
Jared Aguinaga 32nd 18:37
Kyle Mueller 57th 18:57
Robert Wagner 60th 19:06
Out of 172 runners

Girls
Eisabel Guerrero 15th 12:53
Isyss Cortez 72nd 14:02
Yadhira Mendez 103rd 15:02
Jazmine Ortega 105th 15:03
Mariana Verdeja 111th 15:09
Nivea Sanchez 15:18
Jackelyn Paredes 15:54
Out of 180 runners
Coach Gilbert Ruiz comments, “I told the xc runners before we left on Sunday, that if they were not ready to accomplish the goals I had set for each team…then they needed to get off the bus. Of course no one would ever embarrass themselves and get up, so of course they were stuck with trying to achieve them.”
“The girls started our morning, accomplishing their goal and then some. They finished 9th out of 24 teams, which is our highest finish at a regional meet, and beat both Dilley (12th) and Jourdanton (20th). Not only did the team have a great finish, freshman Eisabel Guerrero cut over a minute off of her district time to finish 15th and qualified as a wild card. She is the first freshman, BOY OR GIRL, that I have coached here in the last 17 years to qualify individually to the STATE MEET.”
“For the boys, I wasn’t really sure what was going to happen. This group is not one of the most talented groups I’ve had, but they are the hardest working team I’ve had. They listen to instruction and follow the game plan and when you haven’t been able to train like we have wanted to, executing the game plan is even more important. Due to the lack of training, we couldn’t afford to start too fast but yet not sacrifice position too much either. And then we had to hope that we had enough to make a strong finish and we did. We had a stronger third mile than some of the runners we needed to beat and were able to make up lots of positions at the end and finish first.”
“We were able to knock off #4 Luling, which has been a very dominate force in 3A since ’09, the last time they were in the 4A level. We were one of 2 teams to beat them in 2009 before they moved down, since then they had never lost the regional meet till yesterday. I know they are not the same team that they have been the past 8 years. In those years they won 8 straight State Championships(’10-’17), but they still have 3 of those guys that were on part of those teams, so beating them is a big accomplishment in 3A.”
“I couldn’t have been more proud of both groups. They came ready to compete and now some have the opportunity to participate at the UIL CROSS COUNTRY STATE CHAMPIONSHIPS on November 9th at Old Settler’s Park in Round Rock. For Eisabel, she is only the 4th girl I have had the pleasure of taking to the State meet. For the boys, it is our 5th time going and in all previous 4 we were fortunate to have had to the opportunity to stand on the medal stand…I want to thank everyone who had to take the day off to go and cheer us on. The STATE MEET is on a Saturday… Hope to see you there!!!”