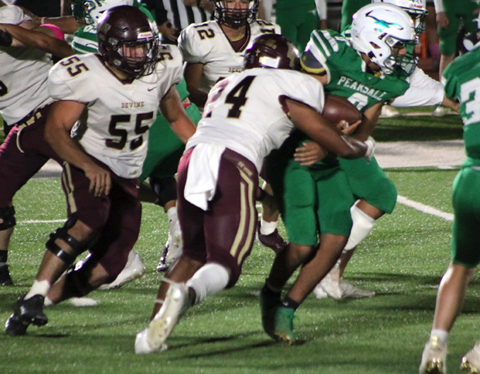 Devine’s Ethan Santos returned Pearsall’s kickoff 88 yards for the first of ten Warhorse touchdowns on the night, with only seconds off the scoreboard clock.
Devine led 23-0 after the first quarter and 55-7 at the break before cautiously cruising to the 68-14 thumping of Pearsall. The Horses take on Crystal City in the last district game of the season Friday at Warhorse Stadium before moving on to state playoff ballgames.
Devine is now 7-2 overall including 3-1 in District 15-4A DII, while the Mavericks drop to 0-9 on the season and 0-4 in league play.
“Great win on Friday!” Head Coach Paul Gomez said to begin his post-game analysis. “The game got away pretty quick. Our kickoff return was a great start! Offensively we had a great game and our line did a great job blocking and our backs did as well.”
Nineteen seconds into the game, Devine led 7-0 after the Santos kickoff return and Hayden DuBose point after kick. The Horses quickly struck again on a DuBose 37-yard run with 6:41 remaining in the first quarter.
Pearsall’s Joey Ramirez ran up the left sideline for a 60-yard touchdown run, but that 14-7 deficit was the closest the Mavericks got the rest of the night as Devine went on to score once more in the first quarter, and five times in the second 12-minutes.
After Pearsall cut Devine’s lead in half, quarterback Brady Hackebeil hit Santos for a wide-open 47-yard scoring strike on a wheel-route with a little under two minutes left in the opening quarter.
The Horses forced a Pearsall punt on the Mavericks ensuing possession, however the snap went way over the head of their punter and the ball bounded back near the end zone.
Not wanting to be tackled to give Devine great field position inside the 10-yard line, the punter booted the ball out of the back of the end zone giving the Horses a safety and a 23-7 lead.
Santos scored on runs of 9, 3, and 92 yards to open the second quarter, boosting the lead to 41-7.
DuBose added his second touchdown of the half on a 12-yard run, and Hackebeil stripped a Maverick ball carrier of the football to return it 56-yards for a touchdown with only 0:12 left before halftime.
Devine’s 55-7 lead was more than enough and the Warhorses tried to distribute the ball amongst their loaded backfield the best they could, without running up the score. Neither team scored in the third quarter.
Warhorse running back found a seam for a 3-yard touchdown in the fourth quarter, and Jonathan Weinkam scored his first career varsity touchdown on a 12-yard run with a 1:50 to go to close out the scoring in the 66-14 contest.
“When a team is unselfish about who carries the ball and who gets the yards, they are definitely hard to beat,” Gomez said in reference to normal workload carries among the loaded backfield being reduced with the score getting out of hand so quickly. “When they start complaining about getting their carries or yards then we could have a problem. Thank God this team has been unselfish to this point. A lot of times success can turn a negative from within but this bunch has been about the team and about winning and not about individuals.
Defense
Pearsall had been shut out several times in previous ball games this season, but with the Horses kicking off 11 times to the Mavericks it generated extra scoring opportunities for them. Nonetheless, with two takeaways and allowing only 123 yards offense and a measly five first downs.
“Defensively we played a really good game. We were very aggressive and we tackled well. Their running back (Ramirez) is hard to stop. He is a big kid with speed. I think our boys did a great job trusting the game plan that Coach Villa implemented and we are definitely starting to trust the process. I’m very proud of our boys. We have had great effort and it’s been better every week,” Gomez said in closing.
By Jerel Beaty
Staff Writer