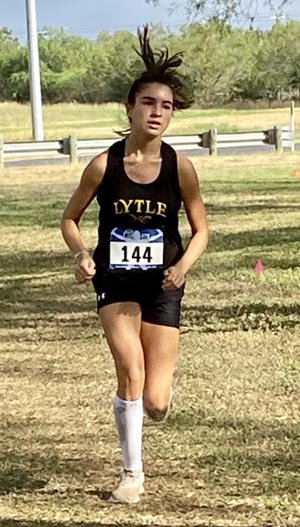 The Lytle Pirate and Lady Pirate JV Cross Country runners closed out their 2020 season at the District 27-3A meet in Poth. Head Coach Gilbert Ruiz is proud of what his up and coming runners accomplished this season.
“I do not want to forget our JV group that we had run on Monday as well,” Ruiz stated. “Due to grades, injuries, sickness, and protocols, we were not able to fill full teams on both the boys and girls groups. We did have three boys and three girls run in the JV division with 5 of the 6 placing in the top 5.”
Both the Lady Pirates and the Pirates made great impressions during the running of the district meet.
“Dezmarie Ortega captured the JV district crown, with Nivea Sanchez coming in second and Allison Marshall 5th. Brandon Obando captured the district crown as well with Daniel Mercado placing 2nd,” said Ruiz. “Because of their performances on Monday, a couple may now get a chance to compete at the Regional Meet on November 9.”
Congratulations to both squads on a terrific season.
By Jerel Beaty
Staff Writer