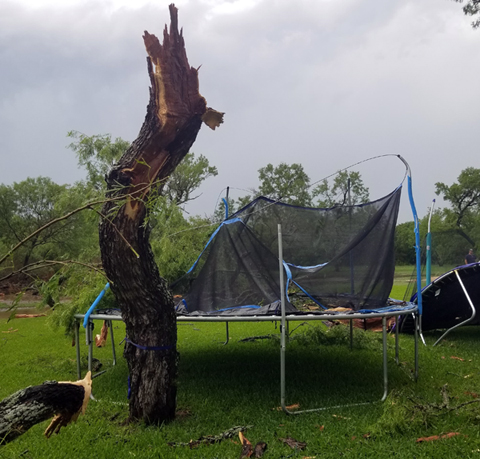 Karissa Barta of Lytle shared these pictures showing the strange aftermath of last Tuesday, May 11th’s storm damage. Barta described the odd occurrence in which a mesquite tree seemingly “exploded” along with other damages. It happened at the family home located in Quail Creek Subdivision.

“About 5:30pm we heard the storm and saw a couple of lightning strikes,” Barta said. “Then we heard this loud crack and a noise we will never forget. The boom was so loud it shook our house. I grabbed babies because we saw the tree fall and things flying. When we went outside we had no idea what we were going to see…But the trees exploded, with pieces landing over 200 ft. away from the trees. My daughter Kylie also got shocked from something (computer or phone), and frames, lights, and photos flew off her wall. It also fried our AC. Thank God we are all ok.”
Chunks of the tree landed on the roof, trampoline, and scattered across the yard as far as 200 yards, the family said. One large chunk of the tree even pierced the nearby tin barn, landing inside on the work bench.
According to Purdue University, a lightning strike can indeed cause trees to explode. “The electrical current creates intense heating, often resulting in the bark virtually exploding off in large strips.”