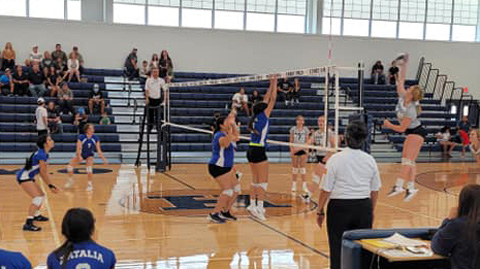 In their opening game against Hondo, the Lady Mustangs fell in three sets. This was a tough first game but the Lady Mustangs know what they need to work on and will host their home tournament this week with games starting on Thursday. After their tournament, they will host Sabinal and then compete in the Devine Arabian Round-Up.
Falling 14-25, 14-25, 20-25 to the Owls, the Lady Mustangs are still back in the rotation of volleyball after a long summer break. They ended last season 2nd in district with a record of 11-4 and are now under a new head coach, Tara Cortinas. The Lady Mustangs look to fill three squads again this season, so Coach Cortinas has a lot of talent to work with. The Lady Mustangs look to push farther into play offs this season than they have in the last couple of years.
Tina Fulton 9 digs, 2 aces. Kody Blanquiz 6 digs. Jelli Padilla 3 digs, 3 blocks, 3 kills. Kylee Spangler 2 blocks, 4 kills. Isabella Martinez 4 assists. Anaya Jones 3 assists, 3 aces.
By Dicy Chambers
Sports Writer