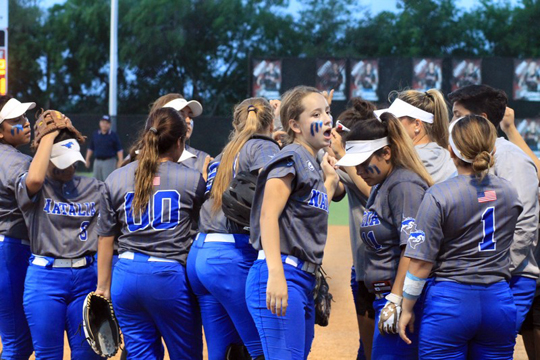 For a third straight season, the Natalia Lady Mustang Softball team exited the Class 3A Playoffs in the Area Round. Not much went right for the girls in blue, as they struggled with wounded leaders in the circle resulting in two games full of overall struggles.
As a result, the 29-3A 2nd seed Bishop Lady Badgers were able to sweep past Natalia in two straight games by scores of 6-2 and 14-4 en route to the Regional Quarter-Finals where they will face 3rd seed district foe Banquete this week.
Game 1– San Antonio’s leading strike-out pitcher on the softball diamond was not available, due to injury. This allowed senior Dani Garza, who herself just returned from a 2 month injury to take to the field.
Garza’s first pitch soared over the catchers head, but she was quick to recover. Garza eventually found her specialty pitch (change-up) which many times, made Bishop batters look silly.
The only issue came, when Natalia was forced to play defense and was put under pressure. This is when the defense began to crumble and unable to support the senior in the circle.
Bishop was able to take an early 2-0 lead on Natalia, as they used a walk, a single and a crucial error outfield to score both runs.
The Lady Badgers added to their lead in the bottom of the 3rd, as they used a walk, another crucial error and a fly-out to take a 3-0 lead.
Natalia battled back in the top of the 4th, as things started off with a single by Dani Garza. Natalia’s Bivi Figueroa tripled to the right-center field fence scoring Garza. Natalia scored their second run, on a nice SAC bunt by Trista Vera. This is as close as Natalia would get.
Bishop scored three final runs in the bottom of the 5th inning courtesy of three singles and an error.
Natalia had their chances, as they stranded a total of five runners on base. The girls in blue lacked timely hitting and when given the bunt signal, couldn’t lay down a bunt when needed.
As a result, Bishop won game one 6-2. Garza finished the game pitching 6.0, allowing 4 hits, walked 3, struck out 7 and allowed 6 runs, none of which were earned.
At bat: Garza 1-4, Vera 0-2-1RBI, Taty Alvarado 0-4, Gabi Munoz 1-3, Gabby Contreras 0-3, Mena Figueroa 1-3, KK Lara 0-1, Bryanna Perez 0-3, Dez Perez 0-1, B. Figueroa 1-2-1RBI-1run scored.
Defensive Put-Outs: B. Figuertoa 7, Contreras 4, Santoya 2, Vera 1, Lara 1, M. Figueroa 1, Perez 1. Assists: M. Figueroa 2, Garza 1, B. Figueroa 1.
Game 2– Friday evening, Natalia returned to Live Oak County hoping for a different result than in game one. Freshman Abi Woodson returned to the mound, but it was evident early on she was not herself and remained in pain.
Woodson lasted a short time, before being replaced by senior Garza who also appeared to not be herself on the mound. Eventually, Woodson was placed back in the game and struggled to the finish.
The cards were not in Natalia’s favor, as these two talented ladies gave a heck of an effort, but were nowhere near 100% physically.
Bishop smelled blood, and went for the kill, as they belted out 16 hits en route to a lop-sided 14-4 run-rule victory. This did mark the first time in 4 years Natalia was run-ruled.
Natalia did have their moments including scoring two runs in the bottom of the 3rd and two in the bottom of the 4th to keep things somewhat close. Natalia stranded five runners during this game two loss.
Bishop scored eight big runs in the top of the 3rd, three in the top of the 5th and three in the top of the 6th to account for their 14 runs. The daggers were two 2-run home-runs during their scoring frenzies.
Woodson pitched 2.2 innings, allowed 7 hits, walked 3, struck out 3 and allowed 7 runs, 5 of which were earned.
Garza pitched 3.1, allowed 9 hits, walked 1, struck out 0 and allowed 7 runs, 3 of which were earned.
At bat: Garza 0-2, Vera 1-3-1run scored, Alvarado 2-4-1RBI, Munoz 1-1, Contreras 1-3-1RBI, Figueroa 1-3-1run scored, Lara 0-2, B. Perez 2-3-1RBI-1run scored, Santoya 1-3, B. Figueroa 0-1-1run scored.
Defensive Put-Outs: M. Figueroa 5, B. Figueroa 4, Alvarado 4, Contreras 4, Lara 1. Assists: M. Figueroa 5, Alvarado 2, Garza 2, Perez 1, B. Figueroa 1.
Bishop advances to the Regional Quarter-Finals to battle Banquete. Other Quarter-Final match-ups include: Hallettsville vs. Karnes City, Lyford vs. Santa Gertrudis and Columbus vs. Schulenburg.
Next week, we will take a look back at the season, final stats and also look at who made All-District for 30-3A.
By Eric Smith