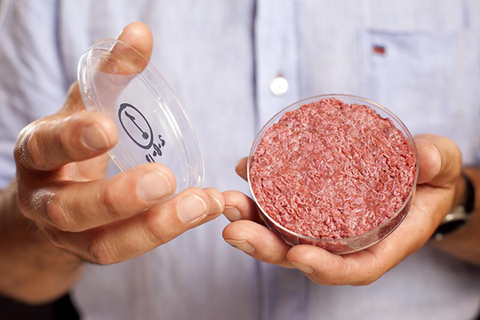 In the new age of veggie burgers and now lab-grown cellular hamburgers, we celebrate the deep roots of traditional farming and ranching in Medina, Frio, Atascosa, and the surrounding areas. Nevertheless, as the first lab-grown meat plant begins to churn out “livestock and poultry products” grown in petri dishes, we wanted to make readers aware of what’s hitting the shelves next year, and get some thoughts from local cattlemen.
Cellular “meat” is grown from stem cells of animals, “to get a similar taste and nutrients,” according to some. You might not have heard much about it, but it has been discussed for years and will hit shelves and plates in 2022. The FDA will oversee cell growth, and the USDA will oversee the cell harvest and labeling stages of these “livestock and poultry products”.
According to Cultured Beef.org, cellular “meat” is created by harvesting muscle cells from a living cow. “Scientists then feed and nurture the cells so they multiply to create muscle tissue, which is the main component of the meat we eat….The cells grow into strands. 20,000 of these small strands of meat are then combined to create one normal sized hamburger.”
Cells grow around a scaffold, which helps the tissue take on the shape of nuggets or patties, for example.
Future Meat Technologies, which opened recently, is the first lab-grown meat plant to open and uses bioreactors to whip up cell-cultured meat. The company based in Israel says it is “Rising to Meet the Challenge.”
On the company website, future-meat.com, it states, “We crave meat, and celebrate it. However, meat production has become unsustainable. Animal agriculture utilizes over 80% of the world’s habitable land, 30% of our freshwater supply, and is a major driver for deforestation. Growing population and dietary changes are predicted to lead to scarcity and escalating prices.”
Local cattleman, Ernie Morales Sr., owns Morales Feedlots, which has been a family business in Devine for over 50 years. He gave us his take on the issue, and stated confidently that real beef isn’t going anywhere soon. Morales was appointed by the Secretary of Agriculture to serve on the Cattleman’s Beef Board.
“If my grandfather were here to see this, Lord have mercy,” Morales said.
“My mission for serving on the CBB board is to try to keep the truth out there about beef. We (traditional cattlemen) are producing a wholesome product that is natural and safe,” Morales said. “Bottom line, I firmly believe that the United States consumers feel like we have the safest food supply in the world, and chemically-altered meat is not what they want.”
“I do not see it as a threat to the beef industry,” Morales said. “To take something natural that God put on this earth and replicate it by science and chemicals….Is that what you want to eat? The ick factor is just not good.
“I do not feel threatened by it at all–unless it becomes a government-mandated part of the Green New Deal to reduce the flatulence of beef cattle that’s causing harm to the ozone layer. I’m serious, you remember when they wanted to monitor cattle farts before?”
Some industry experts assert that the emissions to create lab-grown meat will have a far bigger effect on climate change than “cow flatulence” ever could.
Morales notes that about 50% of beef consumption is hamburger meat, “so fast food is a huge part of that.”
Morales has also served on the board of directors of the National Cattleman’s Beef Association, the past president of the Texas Cattle Feeder’s Association, and the chairman of the Animal Health Commission in the past.
The Cattleman’s Beef Board states that “When it comes to sustainable production processes, the beef industry has moved forward in leaps and bounds.”

When some major fast food chains began serving veggie-burger last year, a press release titled “Americans Chose Beef,” by the Cattleman’s Beef Board further stated, “Ironically, meat eaters are the target audience for many of the companies promoting plant-based, alternative proteins. Their campaigns have centered around their products’ amazing similarity, texture and taste compared to beef.”
The press release goes on to quote a CBB board member, “Beef has one ingredient—beef. While plant-based alternatives, consisting of dozens of ingredients, have demonstrated similarities to beef, it’s important that consumers understand exactly what they’re eating and where it came from,” states Janna Stubbs, Cattlemen’s Beef Board member from Alpine, Texas. “The beef industry has worked hard to be transparent and give consumers the high-quality beef they seek and trust to feed their families.”
USDA/FDA
“On March 7, 2019, USDA and FDA announced a formal agreement to jointly oversee the production of human food products made using animal cell culture technology and derived from the cells of livestock and poultry to ensure that such products brought to market are safe, unadulterated and truthfully labeled. Under the agreement, FDA will oversee cell collection, growth, and differentiation of cells. FDA will transfer oversight at the cell harvest stage to USDA’s Food Safety Inspection Service (FSIS). FSIS will then oversee the cell harvest, processing, packaging, and labeling of products.”
An older 2018 press release on USDA.gov also discusses the beginnings of cell-cultured meat.
Public Comment on Labeling going on now
Right now, the agency is accepting public commenting specifically on the process of developing labeling regulations for meat and poultry products made using animal cell culture technology.
“The ANPR is requesting comment on specific topics to be considered during rulemaking related to statutory and regulatory requirements for the labeling of these meat and poultry products: consumer expectations about the labeling of these products, especially in light of the nutritional composition and organoleptic qualities (taste, color, odor, or texture) of the products; names for these products that would be neither false nor misleading; economic data; and any consumer research related to labeling nomenclature for products made using animal cell culture technology.”
FSIS invites those comments, which may be submitted by one of the following methods:
Federal eRulemaking Portal: This website provides the ability to type short comments directly into the comment field on this Web page or attach a file for lengthier comments. Go to https://www.regulations.gov.Follow the on-line instructions at that site for submitting comments.
Mail: Send to Docket Clerk, U.S. Department of Agriculture, Food Safety and Inspection Service, 1400 Independence Avenue SW, Mailstop 3758, Washington, DC 20250-3700.
Tyson makes large investment in cellular meat
One of the world’s largest food producers, Tyson Foods, is one of the cellular-meat lab’s biggest investors. In 2019 the company announced its $2.2M investment. Tyson’s press release states, that Future Meat Tech is a “biotechnology company advancing a distributive manufacturing platform for the cost-efficient, non-GMO production of meat directly from animal cells, without the need to raise or harvest animals.”
It goes on to say…. “We’re excited about this opportunity to broaden our exposure to innovative, new ways of producing protein,” said Justin Whitmore, Executive Vice President, Corporate Strategy and Chief Sustainability Officer of Tyson Foods. “We continue to invest significantly in our traditional meat business but also believe in exploring additional opportunities for growth that give consumers more choices.”
Additional thoughts….
Arnold Saunders, of Devine, has been in the cattle business for 65+ years, and he gave his opinion on the matter.
“Sounds yummy doesn’t it?” Saunders said with a grin. “You’ll never see that stuff on my plate or in my house, no way.”
“My great grandpa, William Eli Saunders, came to this area from England in the late 1800s and raised cattle in the Charlotte-Bigfoot area. His brand has been passed down through four generations.”
“When I was 3 years old daddy took me to Jourdanton to get my first cow. I paid $5 for that cow,” Saunders said. “That was in the 50s, during that 7 year drought.”
“People are messing with Mother Nature, and she might just come back and bite ‘em,” Saunders said. “I haven’t eaten at Burger King since they started serving veggie burgers either. And I’ll be damned if I’m going to substitute a hamburger or steak with something artificial and grown in a lab.”
By Kayleen Holder
Editor