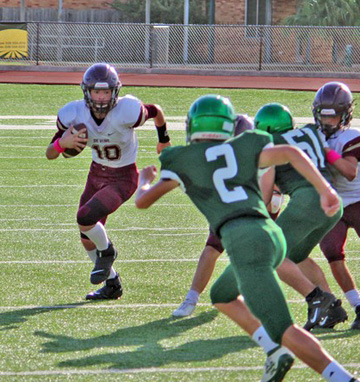 Winning ballgames is tough but turning the ball over eight times makes a team’s success rate go down in flames. Devine played hard no doubt as evidenced by losing to Pearsall 22-14. For a game’s final score to be so close after committing so many turnovers, one would think that it should have been a complete blowout.
Things started out good for Devine as running back Gus Puente broke loose for a 71-yard touchdown run with 3:36 left in the first quarter. Hayden DuBose punched in the two-point conversion for the early 8-0 lead.
Pearsall answered quickly on a 36-yard run but failed to convert the extra point, closing the gap to 8-6.
Barely into the second quarter with 9:38 remaining, Warhorse quarterback Mason Burford hit DuBose for a 50-yard pass and score. The two-point conversion was not successful. Devine led 14-6.
The Mavericks answered the Warhorse touchdown with an 8-yard run and two-point conversion to knot the score at 14 going into the halftime break.
The only score in the second half belonged to Pearsall. With 7:19 on the 4th quarter clock, a Maverick defender stepped in front of a Devine pass attempt, returning it 80 yards for the winning touchdown.
“Our defense played well for being on the field for most of the game only giving up 18 points,” stated Coach Scott Taylor. “However, six of those 18 points came from an interception that Pearsall returned for a touchdown. Having 8 turnovers is never acceptable so I feel like we let a great opportunity to win a game slip away from us.”
By Jerel Beaty
Staff Writer