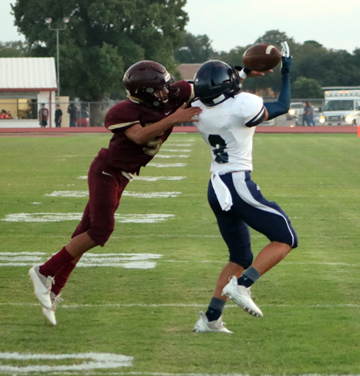 The JV Horses kept their overall and district record unblemished as they defeated the visiting Hondo Owls 32-20 at Warhorse Stadium last Thursday evening. Devine is now 6-0 overall, including a 2-0 District 15-4A DII record.
“Our execution on offense was probably the best we have been all season,” Coach Heath Poppe said in stark contrast from his previous team assessment following their Carrizo Springs district opener a week ago. “We stayed on blocks this week, hit the proper aiming points, and generated movement off the ball. It was a great TEAM WIN!!!”
The Horses started the game strong by recovering the opening onside kick by Jonathon Weinkam. Elijah Sanchez recovered the loose ball to give Devine possession.
Weinkam capped off the 8-play, 45-yard drive by sneaking one-yard for the touchdown. Eli Contreras ran in the two-point conversion to give Devine an early 8-0 advantage.
The Owls quickly responded however, putting together a 6-play drive with a 4-yard touchdown run. Hondo was not able to convert their conversion attempt, but closed the gap to 8-6.
In the second quarter, the Devine defense forced a Hondo 3-and-out and the Owls shanked the ensuing punt ten yards allowing Devine to take over on their own 47-yard line.
Devine running back Wero Torres finished off a 6-play drive, with a 3-yard run of his own. Contreras ran in his second consecutive two-pointer to boost the Warhorse lead to 16-6.
Hondo responded once again with a score of their own on a 12-yard run to pull within 16-12 as they failed on their two-point try.
Devine’s tight, four-point lead held up through the break. Jose Moralez sprung loose for a good return on the opening second half kickoff to put the Horses in good field position.
Yet another 6-play Devine drive culminated in a 25-yard touchdown run by Wero Torres. Torres added the two-point run as well to increase the Devine lead to 24-12.
The Owls did not go quietly as they came back with an 8-play scoring drive and two-point conversion to tighten the game at 24-20 going into the final frame.
Elijah Sanchez, who ran the ball well all night, had a nice kick return all the way to the Hondo 30-yard line. Even though this Warhorse drive stalled at the 12, it left Hondo a long way to go to try to take the lead.
Another forced punt by the Warhorse defense had Torres returning it to the 18-yard line. Two plays later, Torres finished what he started with a 13-yard run. Weinkam added the two-points to close out the 32-20 victory.
“Our tight ends, Seth Deleon, Tyler Pike, Sam Mills, Trinidad Hernandez, and Miguel Posada had great games blocking for our ball carriers. A lot of credit goes to them as well as our fullback Jose Moralez. He did an amazing job blocking. I am really proud of the TEs, FB, and our offensive linemen as well,” Poppe said in closing.
Devine’s defense stepped up to the challenge of stopping a good Hondo JV team. Hondo scored three times, but the Horses stopped the Owls cold other times.
“The JV defense bent but did not break. The coaches are very proud of how the boys adjusted to some success Hondo had. Late in the game the defense got enough stops for the win. Shout out to Wero Torres; he did a great job against the run and also defending the pass,” said defensive signal caller Coach Evan Eads.
Up next
Devine travels to Bandera to take on the Bulldogs Thursday evening. Kickoff is set for 6:45pm.
By Jerel Beaty
Staff Writer