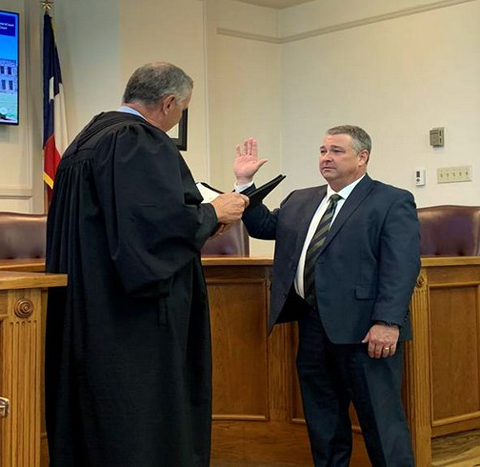 September 19, 2019 –Austin, Texas–Governor Greg Abbott has appointed Mark Haby as District Attorney for the 38th Judicial District of Medina, Uvalde, and Real counties for a term set to expire December 31, 2020, or until his successor shall be duly elected and qualified.
The new appointment came after former District Attorney, Daniel Kindred shifted gears and is now serving as the Judge of the newly created 454th Judicial District Court in Medina County.

Mark Haby of Castroville is an attorney and has served as a Justice of the Peace since 2003. He is a member of the State Bar of Texas, Texas Justice of the Peace and Constables Association, Texas Municipal Courts Association, Medina County Bar Association, San Antonio Criminal Defense Lawyers Association, and the Phi Alpha Delta Law Fraternity International. He is a member of the St. Louis Catholic Church ACTS Community Core Team and the Alsatian Festival of Texas Planning Committee and a volunteer for the Annual St. Louis Day Church Picnic. Additionally, he is a former member of the St. Louis Catholic School Council, former assistant coach for Medina Youth Football Association, and a former volunteer for the St. Vincent de Paul Society. Haby received a Bachelor of Arts in public justice from St. Mary’s University and a Juris Doctor degree from St. Mary’s University School of Law.
Daniel Kindred of Hondo- Governor Greg Abbott has appointed Danny Kindred Judge of the 454th Judicial District Court in Medina County, effective September 1, 2019, for a term set to expire on December 31, 2020, or until his successor shall be duly elected and qualified. Kindred served as the District Attorney for the 38th Judicial District of Texas, which includes Medina, Uvalde, and Real counties, since 2009. Prior to being elected, he served as an assistant district attorney for the Bexar County District Attorney’s Office and the 33rd Judicial District, which includes Llano, Blanco, Burnett, and San Saba counties. He is a Master Peace Office, member of the State Bar of Texas, and a former Judge Advocate General Corps Officer. Additionally, he served a one year deployment to Iraq in 2008, while serving he was awarded a combat action badge and a Bronze Star. He retired from the Army Reserves as a Captain in 2014. Kindred received a Bachelor of Arts in history from The University of Texas at San Antonio and a Juris Doctor degree from the Thurgood Marshall School of Law.