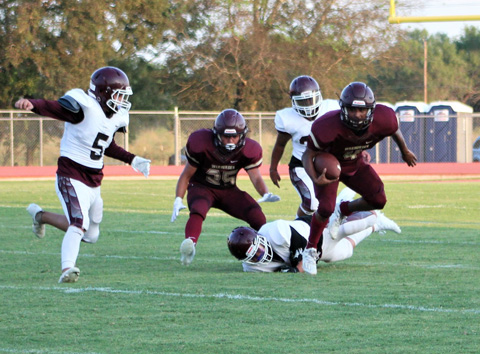 Devine and San Antonio Memorial enter Friday night’s contest with each team coming into the game with season-opening victories over Owl-mascot teams last week. The Horses kicked off their ’21 season with a 55-31 plucking of the Highland Owls while Memorial used a second half surge to fly by the Hondo Owls 33-23 in their first game.
Memorial did not post gaudy rushing stats in comparison to what the Horses put up, rushing 36 times for only 116 yards, while Devine toted it 55 times for 388 yards..
It appears the Minutemen like to air it out occasionally, however as they threw 26 times for 213 yards against Hondo. Devine’s defense struggled at times to contain Highlands talented quarterback-receivers combinations, giving up 232 yards to their Owl competition a week ago.
Gomez’s take
Devine Head Coach Paul Gomez who compares similar schemes between last week’s Highlands team and the Warhorses upcoming opponent.
“Memorial is a lot like Highlands in the fact they are returning several veteran players from a year ago,” Gomez began. “Seven offensive starters and five defensive starters come back for a team that is expected to compete in the state playoffs.”
Just as Highlands had an explosive running back, receiver, and quarterback, Memorial offers the same type challenge to the Devine defense.
Gomez stated, “Offensively they run a spread offense and have lots of weapons with lots of speed.”
There is never a guarantee a Warhorse offense will put half-a-hundred on an opponent like they did to the Owls last week, but I bet they are going to try.

“Defensively, they base out of a ‘50’ defense. Their defensive line has good size and speed as well. I look forward for another great challenge.”
Back to work. There is always room for improvement, otherwise practices could be called off and players and coaches could just show up to play on Friday nights without blinking an eye.
However, improvements are made day by day, week by week, and game by game. Expect this Warhorse team to show improvements in areas that may have not been quite up to par against Highlands.
“Like I tell the players all the time, now they know the formula for success now they have to pay the price just like they did the week before. Lots of great effort and discipline Monday-Thursday! Looking forward to see how much we improve by Friday,” Gomez finished saying.
Stats in less than a minute, man
Minutemen receiver Manuel Valdez caught six passes for 120 yards and scored a touchdown. Matthew Rubio (5 for 86) and Jacob Sanchez (2 for 7) were on the receiving end of a few passes as well from quarterback Elijah Cantu.
Cantu likes to use his legs as well as his arm in getting the Minutemen yardage. In addition to his 213 passing yards, he also rushed eight times for 69 yards and a touchdown.
Containing the damage Cantu can do is a big must for the Horses, as he also ran for a single touchdown.
Running back Alex Villarreal rushed for 39 yards on 12 carries. He scored his second touchdown on the night with 11:34 to go that put Hondo in a 10-point deficit from which they would not recover. Fernando Gallegos added 11 carries for 34 yards.
Maroon Out
It is time to maroon out Warhorse Stadium this Friday night. The football team put together an impressive showing on the road last week and want to return home to a slew of Warhorse Nation fans sporting maroon and gold.
Be loud, be proud, and show your support for not only the hard working football players but by being inside the stadium you are also supporting the band, flag core, cheerleaders, and student managers and trainers, and whatever group happens to be running the concession stand for that particular ballgame.
Kickoff is set for 7:30pm.
By Jerel Beaty
Staff Writer